The Insider Monkey team has completed processing the quarterly 13F filings for the December quarter submitted by the hedge funds and other money managers included in our extensive database. Most hedge fund investors endured a torrid quarter, which certainly propelled them to adjust their equity holdings so as to maintain the desired risk profile. As a result, the relevancy of these public filings and their content is indisputable, as they may reveal numerous high-potential stocks. The following article will discuss the smart money sentiment towards Netflix, Inc. (NASDAQ:NFLX).

Is Netflix, Inc. (NASDAQ:NFLX) a healthy stock for your portfolio? Investors who are in the know are becoming less confident. The number of bullish hedge fund bets decreased by 1 recently. Our calculations also showed that NFLX is among the 30 most popular stocks among hedge funds, ranking 18th. NFLX was in 83 hedge funds’ portfolios at the end of December. There were 84 hedge funds in our database with NFLX positions at the end of the previous quarter. 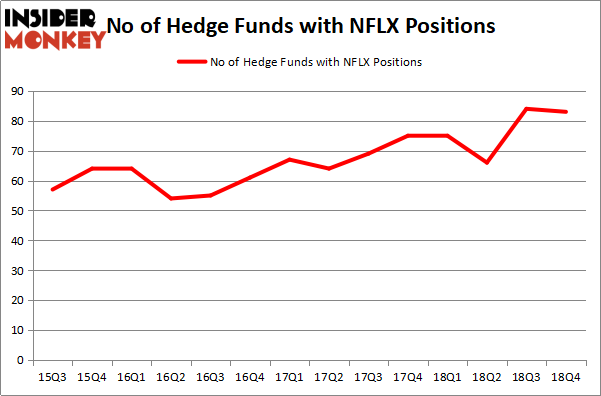 Among these funds, SRS Investment Management held the most valuable stake in Netflix, Inc. (NASDAQ:NFLX), which was worth $950.3 million at the end of the third quarter. On the second spot was Citadel Investment Group which amassed $816.9 million worth of shares. Moreover, Viking Global, D1 Capital Partners, and Matrix Capital Management were also bullish on Netflix, Inc. (NASDAQ:NFLX), allocating a large percentage of their portfolios to this stock.

Since Netflix, Inc. (NASDAQ:NFLX) has witnessed declining sentiment from the entirety of the hedge funds we track, it’s safe to say that there was a specific group of funds that slashed their positions entirely last quarter. Intriguingly, Panayotis Takis Sparaggis’s Alkeon Capital Management dumped the biggest position of the “upper crust” of funds watched by Insider Monkey, worth an estimated $566.8 million in stock. Dan Loeb’s fund, Third Point, also sold off its stock, about $467.7 million worth. These moves are interesting, as total hedge fund interest dropped by 1 funds last quarter.

As you can see these stocks had an average of 38 hedge funds with bullish positions and the average amount invested in these stocks was $2639 million. That figure was $6534 million in NFLX’s case. Adobe Inc. (NASDAQ:ADBE) is the most popular stock in this table. On the other hand PetroChina Company Limited (NYSE:PTR) is the least popular one with only 14 bullish hedge fund positions. Netflix, Inc. (NASDAQ:NFLX) is not the most popular stock in this group but hedge fund interest is still among the highest. Hedge funds that didn’t lose confidence in the stock were handsomely rewarded as the stock returned 35% through March 15th and beat the market by nearly 22 percentage points.

Levin Capital and Other Hedge Funds Are Snapping Up Farmer Brothers Co. (FARM...
Monthly Newsletter Strategy
Download a free copy of our newsletter and see the details inside!
Hedge Fund Resource Center
Related News
30 Most Popular Stocks Among Hedge Funds in Q4 of 2018 3 Stocks Billionaire Dan Loeb Bought in Q3 (and 2 He Dumped) Billionaire Steve Cohen Bought These 4 Stocks in Q3, Predicts Bear Market by 2020 Volatility Presents Opportunities In These 5 Hedge Fund Stocks Hedge Funds Are Betting On Netflix, Inc. (NASDAQ:NFLX) Is Netflix, Inc. (NFLX) A Good Stock To Buy? Apple, Netflix, Etsy, and More: Why These Stocks Are in the Spotlight Ten of the Most Common Addictions 13 African Countries with the Largest White Population in 2018 6 Causes of Human Trafficking in Africa, India, and US
Billionaire Hedge Funds