In today’s marketplace there are tons of formulas shareholders can use to analyze publicly traded companies. Some of the most innovative formulas are hedge fund and insider trading interest. Our researchers have shown that, historically, those who follow the best picks of the elite money managers can outpace their index-focused peers by a very impressive margin. Insider Monkey’s flagship best performing hedge funds strategy returned 24.8% over the last 12 months and outperformed the market by more than 17 percentage points. This strategy also outperformed the market by 3 percentage points in the fourth quarter of this year despite the market volatility (see the details here). That’s why we believe hedge fund sentiment is a useful indicator that investors should pay attention to.

ValuaAct Capital invested $2 billion when Microsoft was trading at lower $30s and completely sold out of its position earlier this year. This didn’t seem to discourage other hedge funds. Overall, hedge funds are in an optimistic mood. The number of long hedge fund positions moved up by 9 recently.

Of the funds tracked by Insider Monkey, Michael Larson who manages the Bill & Melinda Gates Foundation Trust has the number one position in Microsoft Corporation (NASDAQ:MSFT), worth close to $3.2 billion, accounting for 14.3% of its total 13F portfolio. The second largest stake is held by Eagle Capital Management, led by Boykin Curry, holding a $2.18 billion position; the fund has 7.9% of its 13F portfolio invested in the stock. Remaining hedge funds and institutional investors that are bullish include Harvard Management Co, Paul Holland and Matthew Miller’s Glaxis Capital Management and John Hurley’s Cavalry Asset Management. 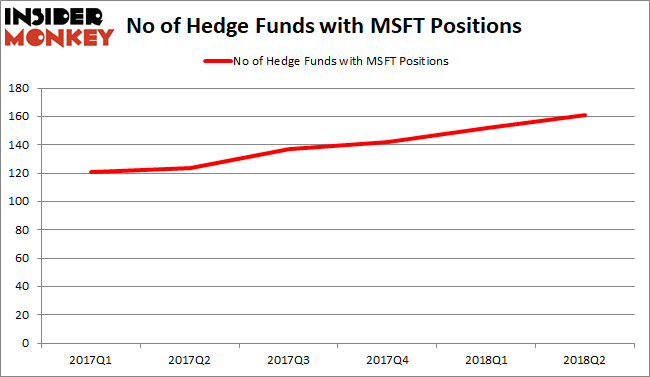 As you can see these stocks had an average of 120.75 hedge funds with bullish positions and the average amount invested in these stocks was $17 billion. That figure was $28.1 billion in MSFT’s case. Facebook Inc (NASDAQ:FB) is the most popular stock in this table. On the other hand Berkshire Hathaway Inc. (NYSE:BRK-B) is the least popular one with only 81 bullish hedge fund positions. Microsoft Corporation (NASDAQ:MSFT) is not the most popular stock in this group but hedge fund interest is still above average.

Seven years ago David Einhorn tried to go soft activist on Microsoft when the stock was trading for less than a quarter of its current price. This was followed by Curtis Macnguyen and Whitney Tilson’s articles/comments. ValueAct Capital is the first hedge fund that successfully instigated change at the tech giant and also benefited the most among the hedge funds we track. Billionaire Mandel’s Lone Pine also recommended a position in the stock a few years ago at the Sohn Conference. The last time we heard from a hedge fund manager regarding high flying tech stocks was this week’s Sohn San Francisco Conference. Longtail Alpha’s Vineer Bhansali recommended shorting technology shares. He thinks tech stocks will underperform in a rising interest rate environment. You can check out the entire list of hedge fund recommendations at this conference on our site.

Overall, we think, it is time to be cautious and avoid Microsoft if you are looking to initiate a new position.

Apple, Cirrus Logic, GoPro, and More: Here’s Why These Stocks Are On...