Hedge Funds Have Never Been This Bullish On Microsoft Corporation (MSFT)

Microsoft Corporation (NASDAQ:MSFT) has seen an increase in hedge fund interest lately. MSFT was in 174 hedge funds’ portfolios at the end of the fourth quarter of 2018 and hedge fund sentiment towards the stock is currently at its all time high. There were 170 hedge funds in our database with MSFT holdings at the end of the previous quarter. Our calculations also showed that MSFT is the number one stock among the 30 most popular stocks among hedge funds.

At the end of the forth quarter, a total of 174 of the hedge funds tracked by Insider Monkey were long this stock, a change of 2% from the second quarter of 2018. Below, you can check out the change in hedge fund sentiment towards MSFT over the last 14 quarters. So, let’s examine which hedge funds were among the top holders of the stock and which hedge funds were making big moves. 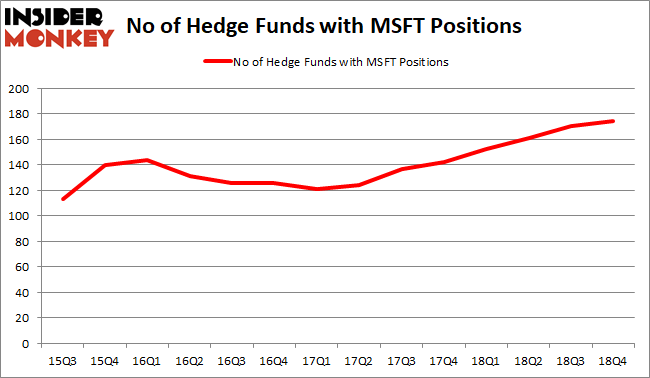 Among these funds, AQR Capital Management held the most valuable stake in Microsoft Corporation (NASDAQ:MSFT), which was worth $2048.9 million at the end of the third quarter. On the second spot was Fisher Asset Management which amassed $1974.7 million worth of shares. Moreover, Eagle Capital Management, Bill & Melinda Gates Foundation Trust, and Viking Global were also bullish on Microsoft Corporation (NASDAQ:MSFT), allocating a large percentage of their portfolios to this stock.

As aggregate interest increased, key money managers were breaking ground themselves. SCGE Management, managed by Christopher Lyle, created the most valuable position in Microsoft Corporation (NASDAQ:MSFT). SCGE Management had $90.4 million invested in the company at the end of the quarter. Michael Kharitonov and Jon David McAuliffe’s Voleon Capital also initiated a $77.2 million position during the quarter. The other funds with new positions in the stock are Edmond M. Safra’s EMS Capital, Jeffrey Altman’s Owl Creek Asset Management, and Ryan Caldwell’s Chiron Investment Management.

As you can see these stocks had an average of 142.75 hedge funds with bullish positions and the average amount invested in these stocks was $23162 million. That figure was $24667 million in MSFT’s case. Amazon.com, Inc. (NASDAQ:AMZN) is the most popular stock in this table. On the other hand Apple Inc. (NASDAQ:AAPL) is the least popular one with only 116 bullish hedge fund positions. All of these stocks are actually very popular among hedge funds. Our calculations showed that top 15 most popular stocks among hedge funds returned 19.7% through March 15th and outperformed the S&P 500 ETF (SPY) by 6.6 percentage points. Hedge funds were also right about betting on Microsoft as the stock returned 14.6% and outperformed the market as well.

Is MSFT A Good Stock To Buy Right Now?NASDAQ:MSFTNewsfeedYahoo Finance