Is JPMorgan Chase & Co. (NYSE:JPM) a buy right now? Prominent investors are betting on the stock. The number of long hedge fund bets improved by 2 in recent months. Our calculations also showed that JPM is among the 30 most popular stocks among hedge funds, ranking 10th. JPM was in 101 hedge funds’ portfolios at the end of the fourth quarter of 2018. There were 99 hedge funds in our database with JPM holdings at the end of the previous quarter.

Heading into the first quarter of 2019, a total of 101 of the hedge funds tracked by Insider Monkey were long this stock, a change of 2% from the second quarter of 2018. On the other hand, there were a total of 100 hedge funds with a bullish position in JPM a year ago. With hedgies’ capital changing hands, there exists an “upper tier” of key hedge fund managers who were boosting their stakes significantly (or already accumulated large positions). 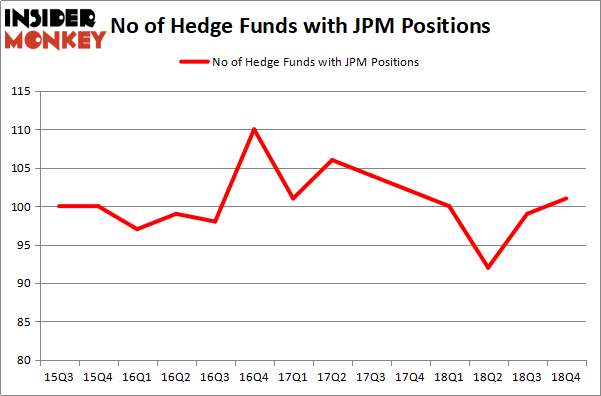 More specifically, Berkshire Hathaway was the largest shareholder of JPMorgan Chase & Co. (NYSE:JPM), with a stake worth $4892.4 million reported as of the end of September. Trailing Berkshire Hathaway was Lansdowne Partners, which amassed a stake valued at $563.2 million. Fisher Asset Management, Greenhaven Associates, and Adage Capital Management were also very fond of the stock, giving the stock large weights in their portfolios.

As one would reasonably expect, some big names have jumped into JPMorgan Chase & Co. (NYSE:JPM) headfirst. Steadfast Capital Management, managed by Robert Pitts, assembled the largest position in JPMorgan Chase & Co. (NYSE:JPM). Steadfast Capital Management had $124.8 million invested in the company at the end of the quarter. Dmitry Balyasny’s Balyasny Asset Management also initiated a $59.8 million position during the quarter. The other funds with new positions in the stock are Andrew Weiss’s Weiss Asset Management, and Parvinder Thiara’s Athanor Capital.

As you can see these stocks had an average of 62 hedge funds with bullish positions and the average amount invested in these stocks was $5157 million. That figure was $10017 million in JPM’s case. Visa Inc (NYSE:V) is the most popular stock in this table. On the other hand Nestle SA (OTCMKTS:NSRGY) is the least popular one with only 4 bullish hedge fund positions. JPMorgan Chase & Co. (NYSE:JPM) is not the most popular stock in this group but hedge fund interest is still among the highest. Our calculations showed that top 15 most popular stocks among hedge funds returned 19.7% through March 15th and outperformed the S&P 500 ETF (SPY) by 6.6 percentage points. Only two of these 15 stocks didn’t outperform the market and JPM was one of them,  returning only 10%.

Which is the Most Popular Company Among Hedge Funds?
Monthly Newsletter Strategy
Download a free copy of our newsletter and see the details inside!
Hedge Fund Resource Center
Related News
30 Most Popular Stocks Among Hedge Funds in Q4 of 2018 Has Smart Money Perfectly Timed Its JPMorgan Chase & Co. (JPM) Buying Spurt? 30 Stocks Billionaires Are Crazy About: Insider Monkey Billionaire Stock Index 3 Stocks Billionaire Warren Buffett Bought in Q3 (and 2 He Dumped) 5 Stocks Hedge Funds Can’t Live Without As 13F Deadline Looms 5 Stocks Early Hedge Fund 13F Filers Love The Most Is JPMorgan Chase & Co. (NYSE:JPM) Going to Burn These Hedge Funds? Ten of the Most Common Addictions 13 African Countries with the Largest White Population in 2018 6 Causes of Human Trafficking in Africa, India, and US
Billionaire Hedge Funds