With the fourth-quarter round of 13F filings behind us it is time to take a look at the stocks in which some of the best money managers in the world preferred to invest or sell heading into the first quarter. One of these stocks was Goldman Sachs Group, Inc. (NYSE:GS).

Is Goldman Sachs Group, Inc. (NYSE:GS) the right pick for your portfolio? Hedge funds are taking a bullish view. The number of bullish hedge fund positions increased by 13 in recent months. Our calculations also showed that GS isn’t among the 30 most popular stocks among hedge funds.

At Q4’s end, a total of 70 of the hedge funds tracked by Insider Monkey held long positions in this stock, a change of 23% from the second quarter of 2018. On the other hand, there were a total of 64 hedge funds with a bullish position in GS a year ago. With hedgies’ capital changing hands, there exists a few key hedge fund managers who were adding to their holdings substantially (or already accumulated large positions). 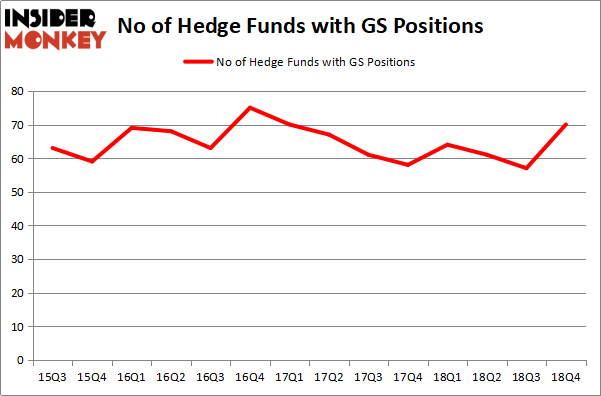 Of the funds tracked by Insider Monkey, Warren Buffett’s Berkshire Hathaway has the most valuable position in Goldman Sachs Group, Inc. (NYSE:GS), worth close to $3.066 billion, comprising 1.7% of its total 13F portfolio. On Berkshire Hathaway’s heels is Eagle Capital Management, managed by Boykin Curry, which holds a $953 million position; the fund has 3.9% of its 13F portfolio invested in the stock. Other peers that hold long positions contain Edgar Wachenheim’s Greenhaven Associates, Noam Gottesman’s GLG Partners and Richard S. Pzena’s Pzena Investment Management.

With a general bullishness amongst the heavyweights, some big names have jumped into Goldman Sachs Group, Inc. (NYSE:GS) headfirst. Lakewood Capital Management, managed by Anthony Bozza, assembled the most outsized position in Goldman Sachs Group, Inc. (NYSE:GS). Lakewood Capital Management had $136.5 million invested in the company at the end of the quarter. Ahmet Okumus’s Okumus Fund Management also made a $128.3 million investment in the stock during the quarter. The other funds with new positions in the stock are Peter Rathjens, Bruce Clarke and John Campbell’s Arrowstreet Capital, Charles Lemonides’s Valueworks LLC, and Steve Cohen’s Point72 Asset Management.

As you can see these stocks had an average of 17.25 hedge funds with bullish positions and the average amount invested in these stocks was $602 million. That figure was $6345 million in GS’s case. Sony Corporation (NYSE:SNE) is the most popular stock in this table. On the other hand Ambev SA (NYSE:ABEV) is the least popular one with only 13 bullish hedge fund positions. Compared to these stocks Goldman Sachs Group, Inc. (NYSE:GS) is more popular among hedge funds. Our calculations showed that top 15 most popular stocks among hedge funds returned 19.7% through March 15th and outperformed the S&P 500 ETF (SPY) by 6.6 percentage points. Hedge funds were also right about betting on Goldman Sachs as the stock returned 19.2% and outperformed the market as well.