In these volatile markets we scrutinize hedge fund filings to get a reading on which direction each stock might be going. With this in mind let’s see whether Glaukos Corporation (NYSE:GKOS) makes for a good investment at the moment. We analyze the sentiment of a select group of the very best investors in the world, who spend immense amounts of time and resources studying companies. They may not always be right (no one is), but data shows that their consensus long positions have historically outperformed the market when we adjust for known risk factors.

Glaukos Corporation (NYSE:GKOS) was in 16 hedge funds’ portfolios at the end of December. GKOS investors should pay attention to an increase in activity from the world’s largest hedge funds in recent months. There were 12 hedge funds in our database with GKOS positions at the end of the previous quarter. Our calculations also showed that GKOS isn’t among the 30 most popular stocks among hedge funds (click for Q4 rankings and see the video at the end of this article for Q3 rankings).

In the 21st century investor’s toolkit there are plenty of methods investors put to use to appraise publicly traded companies. Two of the less known methods are hedge fund and insider trading moves. Our experts have shown that, historically, those who follow the top picks of the top money managers can beat the S&P 500 by a significant amount (see the details here).

With all of this in mind let’s view the fresh hedge fund action encompassing Glaukos Corporation (NYSE:GKOS).

At Q4’s end, a total of 16 of the hedge funds tracked by Insider Monkey were long this stock, a change of 33% from the third quarter of 2019. Below, you can check out the change in hedge fund sentiment towards GKOS over the last 18 quarters. With hedgies’ capital changing hands, there exists a select group of noteworthy hedge fund managers who were upping their holdings significantly (or already accumulated large positions). 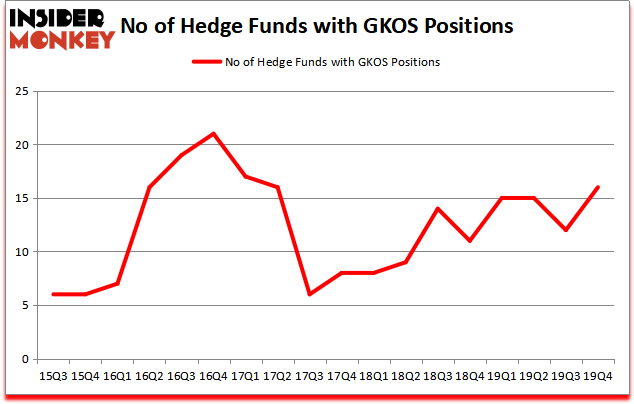 When looking at the institutional investors followed by Insider Monkey, Samuel Isaly’s OrbiMed Advisors has the number one position in Glaukos Corporation (NYSE:GKOS), worth close to $84.3 million, amounting to 1.2% of its total 13F portfolio. The second largest stake is held by Millennium Management, led by Israel Englander, holding a $25.3 million position; the fund has less than 0.1%% of its 13F portfolio invested in the stock. Some other members of the smart money with similar optimism encompass Renaissance Technologies, Ken Griffin’s Citadel Investment Group and Israel Englander’s Millennium Management. In terms of the portfolio weights assigned to each position OrbiMed Advisors allocated the biggest weight to Glaukos Corporation (NYSE:GKOS), around 1.2% of its 13F portfolio. Tudor Investment Corp is also relatively very bullish on the stock, earmarking 0.09 percent of its 13F equity portfolio to GKOS.

Now, key money managers were breaking ground themselves. OrbiMed Advisors, managed by Samuel Isaly, assembled the biggest position in Glaukos Corporation (NYSE:GKOS). OrbiMed Advisors had $84.3 million invested in the company at the end of the quarter. Paul Tudor Jones’s Tudor Investment Corp also made a $2 million investment in the stock during the quarter. The following funds were also among the new GKOS investors: John Overdeck and David Siegel’s Two Sigma Advisors, Alec Litowitz and Ross Laser’s Magnetar Capital, and Michael Gelband’s ExodusPoint Capital.

As you can see these stocks had an average of 18.5 hedge funds with bullish positions and the average amount invested in these stocks was $181 million. That figure was $133 million in GKOS’s case. JELD-WEN Holding, Inc. (NYSE:JELD) is the most popular stock in this table. On the other hand Aurora Cannabis Inc. (NYSE:ACB) is the least popular one with only 12 bullish hedge fund positions. Glaukos Corporation (NYSE:GKOS) is not the least popular stock in this group but hedge fund interest is still below average. This is a slightly negative signal and we’d rather spend our time researching stocks that hedge funds are piling on. Our calculations showed that top 20 most popular stocks among hedge funds returned 41.3% in 2019 and outperformed the S&P 500 ETF (SPY) by 10.1 percentage points. These stocks lost 13.0% in 2020 through April 6th but beat the market by 4.2 percentage points. Unfortunately GKOS wasn’t nearly as popular as these 20 stocks (hedge fund sentiment was quite bearish); GKOS investors were disappointed as the stock returned -44.5% during the same time period and underperformed the market. If you are interested in investing in large cap stocks with huge upside potential, you should check out the top 20 most popular stocks among hedge funds as most of these stocks already outperformed the market in 2020.