Zendesk Inc (NYSE:ZEN) investors should pay attention to an increase in support from the world’s most elite money managers in recent months. ZEN was in 53 hedge funds’ portfolios at the end of the fourth quarter of 2018. There were 44 hedge funds in our database with ZEN holdings at the end of the previous quarter. Our calculations also showed that ZEN isn’t among the 30 most popular stocks among hedge funds.

At the end of the fourth quarter, a total of 53 of the hedge funds tracked by Insider Monkey were bullish on this stock, a change of 20% from the second quarter of 2018. Below, you can check out the change in hedge fund sentiment towards ZEN over the last 14 quarters. With hedge funds’ positions undergoing their usual ebb and flow, there exists an “upper tier” of notable hedge fund managers who were upping their holdings considerably (or already accumulated large positions). 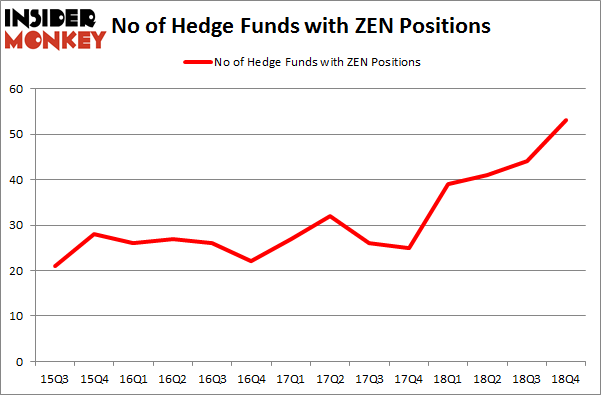 According to publicly available hedge fund and institutional investor holdings data compiled by Insider Monkey, Chase Coleman’s Tiger Global Management LLC has the largest position in Zendesk Inc (NYSE:ZEN), worth close to $211.9 million, amounting to 1.4% of its total 13F portfolio. Sitting at the No. 2 spot is Ken Griffin of Citadel Investment Group, with a $145.5 million position; the fund has 0.1% of its 13F portfolio invested in the stock. Other hedge funds and institutional investors with similar optimism encompass Panayotis Takis Sparaggis’s Alkeon Capital Management, Brandon Haley’s Holocene Advisors and Alex Sacerdote’s Whale Rock Capital Management.

Consequently, key money managers have jumped into Zendesk Inc (NYSE:ZEN) headfirst. Viking Global, managed by Andreas Halvorsen, initiated the most valuable position in Zendesk Inc (NYSE:ZEN). Viking Global had $83.2 million invested in the company at the end of the quarter. Christopher Lyle’s SCGE Management also made a $58.4 million investment in the stock during the quarter. The other funds with new positions in the stock are Keith Meister’s Corvex Capital, Greg Poole’s Echo Street Capital Management, and Anand Parekh’s Alyeska Investment Group.

As you can see these stocks had an average of 22 hedge funds with bullish positions and the average amount invested in these stocks was $580 million. That figure was $1794 million in ZEN’s case. Voya Financial Inc (NYSE:VOYA) is the most popular stock in this table. On the other hand Oaktree Capital Group LLC (NYSE:OAK) is the least popular one with only 7 bullish hedge fund positions. Compared to these stocks Zendesk Inc (NYSE:ZEN) is more popular among hedge funds. Considering that hedge funds are fond of this stock in relation to its market cap peers, it may be a good idea to analyze it in detail and potentially include it in your portfolio. Our calculations showed that top 15 most popular stocks among hedge funds returned 21.3% through April 8th and outperformed the S&P 500 ETF (SPY) by more than 5 percentage points. Hedge funds were also right about betting on ZEN as the stock returned 40.1% and outperformed the market as well.