As we already know from media reports and hedge fund investor letters, many hedge funds lost money in fourth quarter, blaming macroeconomic conditions and unpredictable events that hit several sectors, with technology among them. Nevertheless, most investors decided to stick to their bullish theses and their long-term focus allows us to profit from the recent declines. In particular, let’s take a look at what hedge funds think about Zebra Technologies Corporation (NASDAQ:ZBRA) in this article.

Is Zebra Technologies Corporation (NASDAQ:ZBRA) a marvelous stock to buy now? Money managers are taking a bullish view. The number of long hedge fund positions went up by 2 in recent months. Our calculations also showed that ZBRA isn’t among the 30 most popular stocks among hedge funds.

At Q4’s end, a total of 29 of the hedge funds tracked by Insider Monkey were bullish on this stock, a change of 7% from one quarter earlier. By comparison, 27 hedge funds held shares or bullish call options in ZBRA a year ago. With the smart money’s positions undergoing their usual ebb and flow, there exists a few noteworthy hedge fund managers who were adding to their stakes considerably (or already accumulated large positions). 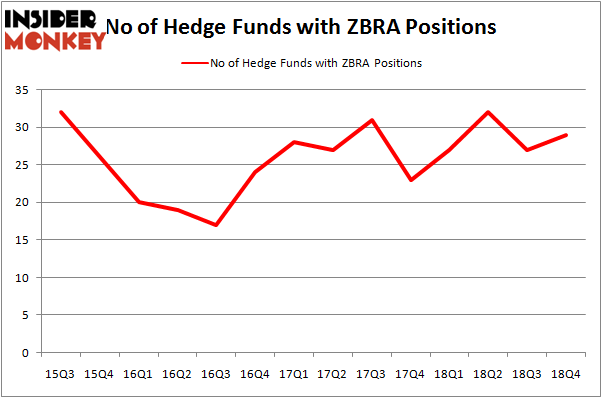 Of the funds tracked by Insider Monkey, John W. Rogers’s Ariel Investments has the largest position in Zebra Technologies Corporation (NASDAQ:ZBRA), worth close to $134.4 million, corresponding to 1.9% of its total 13F portfolio. The second most bullish fund manager is Cliff Asness of AQR Capital Management, with a $129.6 million position; the fund has 0.2% of its 13F portfolio invested in the stock. Some other peers with similar optimism include Thomas Bancroft’s Makaira Partners, Principal Global Investors’s Columbus Circle Investors and Edward Goodnow’s Goodnow Investment Group.

As industrywide interest jumped, key money managers were leading the bulls’ herd. Arrowstreet Capital, managed by Peter Rathjens, Bruce Clarke and John Campbell, created the most outsized position in Zebra Technologies Corporation (NASDAQ:ZBRA). Arrowstreet Capital had $6.9 million invested in the company at the end of the quarter. Matthew Hulsizer’s PEAK6 Capital Management also made a $4.1 million investment in the stock during the quarter. The other funds with new positions in the stock are Matthew Tewksbury’s Stevens Capital Management, Ian Simm’s Impax Asset Management, and Minhua Zhang’s Weld Capital Management.

As you can see these stocks had an average of 28.25 hedge funds with bullish positions and the average amount invested in these stocks was $1010 million. That figure was $751 million in ZBRA’s case. DaVita Inc (NYSE:DVA) is the most popular stock in this table. On the other hand Westlake Chemical Corporation (NYSE:WLK) is the least popular one with only 24 bullish hedge fund positions. Zebra Technologies Corporation (NASDAQ:ZBRA) is not the most popular stock in this group but hedge fund interest is still above average. This is a slightly positive signal but we’d rather spend our time researching stocks that hedge funds are piling on. Our calculations showed that top 15 most popular stocks among hedge funds returned 19.7% through March 15th and outperformed the S&P 500 ETF (SPY) by 6.6 percentage points. Hedge funds were also right about betting on ZBRA as the stock returned 32.7% and outperformed the market as well. You can see the entire list of these shrewd hedge funds here.