W&T Offshore, Inc. (NYSE:WTI) was in 21 hedge funds’ portfolios at the end of the fourth quarter of 2018. WTI shareholders have witnessed an increase in hedge fund interest of late. There were 17 hedge funds in our database with WTI positions at the end of the previous quarter. Our calculations also showed that WTI isn’t among the 30 most popular stocks among hedge funds.

In today’s marketplace there are a lot of signals stock traders employ to appraise their holdings. A couple of the less utilized signals are hedge fund and insider trading activity. We have shown that, historically, those who follow the top picks of the elite hedge fund managers can outperform their index-focused peers by a significant amount (see the details here).

What have hedge funds been doing with W&T Offshore, Inc. (NYSE:WTI)? 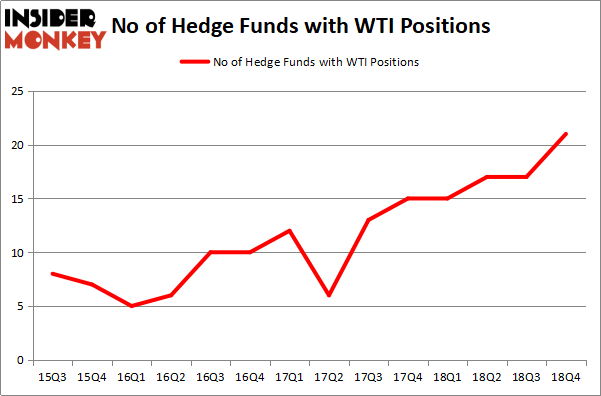 The largest stake in W&T Offshore, Inc. (NYSE:WTI) was held by Renaissance Technologies, which reported holding $29.3 million worth of stock at the end of December. It was followed by Millennium Management with a $8.9 million position. Other investors bullish on the company included Arrowstreet Capital, Two Sigma Advisors, and AQR Capital Management.

Consequently, key money managers have been driving this bullishness. Marshall Wace LLP, managed by Paul Marshall and Ian Wace, created the largest position in W&T Offshore, Inc. (NYSE:WTI). Marshall Wace LLP had $1.2 million invested in the company at the end of the quarter. Steve Cohen’s Point72 Asset Management also made a $1.1 million investment in the stock during the quarter. The other funds with brand new WTI positions are Hoon Kim’s Quantinno Capital, Dmitry Balyasny’s Balyasny Asset Management, and Alec Litowitz and Ross Laser’s Magnetar Capital.

As you can see these stocks had an average of 6.5 hedge funds with bullish positions and the average amount invested in these stocks was $12 million. That figure was $57 million in WTI’s case. Triumph Group Inc (NYSE:TGI) is the most popular stock in this table. On the other hand Merchants Bancorp (NASDAQ:MBIN) is the least popular one with only 4 bullish hedge fund positions. Compared to these stocks W&T Offshore, Inc. (NYSE:WTI) is more popular among hedge funds. Our calculations showed that top 15 most popular stocks) among hedge funds returned 24.2% through April 22nd and outperformed the S&P 500 ETF (SPY) by more than 7 percentage points. Hedge funds were also right about betting on WTI as the stock returned 65.5% and outperformed the market by an even larger margin. Hedge funds were clearly right about piling into this stock relative to other stocks with similar market capitalizations.