Were Hedge Funds Right About Flocking Into Waters Corporation (WAT) ?

We at Insider Monkey have gone over 700 13F filings that hedge funds and prominent investors are required to file by the SEC. The 13F filings show the funds’ and investors’ portfolio positions as of December 31st. In this article we look at what those investors think of Waters Corporation (NYSE:WAT).

To the average investor there are a large number of formulas shareholders use to analyze publicly traded companies. A couple of the most useful formulas are hedge fund and insider trading indicators. Our experts have shown that, historically, those who follow the top picks of the best hedge fund managers can outpace the broader indices by a superb margin (see the details here). 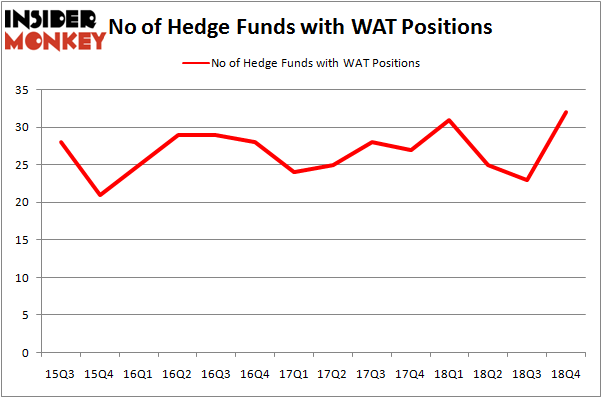 More specifically, Bares Capital Management was the largest shareholder of Waters Corporation (NYSE:WAT), with a stake worth $169.9 million reported as of the end of September. Trailing Bares Capital Management was Renaissance Technologies, which amassed a stake valued at $142.6 million. Generation Investment Management, GLG Partners, and Select Equity Group were also very fond of the stock, giving the stock large weights in their portfolios.

As one would reasonably expect, key hedge funds have been driving this bullishness. Alyeska Investment Group, managed by Anand Parekh, created the biggest position in Waters Corporation (NYSE:WAT). Alyeska Investment Group had $43.6 million invested in the company at the end of the quarter. Phill Gross and Robert Atchinson’s Adage Capital Management also made a $11.5 million investment in the stock during the quarter. The other funds with brand new WAT positions are Peter Rathjens, Bruce Clarke and John Campbell’s Arrowstreet Capital, Ray Dalio’s Bridgewater Associates, and Paul Tudor Jones’s Tudor Investment Corp.

As you can see these stocks had an average of 23 hedge funds with bullish positions and the average amount invested in these stocks was $638 million. That figure was $894 million in WAT’s case. CenterPoint Energy, Inc. (NYSE:CNP) is the most popular stock in this table. On the other hand Fortis Inc. (NYSE:FTS) is the least popular one with only 14 bullish hedge fund positions. Waters Corporation (NYSE:WAT) is not the most popular stock in this group but hedge fund interest is still above average. This is a slightly positive signal but we’d rather spend our time researching stocks that hedge funds are piling on. Our calculations showed that top 15 most popular stocks among hedge funds returned 19.7% through March 15th and outperformed the S&P 500 ETF (SPY) by 6.6 percentage points. Hedge funds were also right about betting on WAT as the stock returned 29.9% and outperformed the market as well.