Is TransDigm Group Incorporated (NYSE:TDG) a buy here? Investors who are in the know are still in a bullish mood even though the number of long hedge fund positions decreased by 1 in recent months. Our calculations also showed that TDG isn’t among the 30 most popular stocks among hedge funds.

At Q4’s end, a total of 47 of the hedge funds tracked by Insider Monkey were long this stock, a change of -2% from one quarter earlier. On the other hand, there were a total of 37 hedge funds with a bullish position in TDG a year ago. With hedgies’ capital changing hands, there exists an “upper tier” of key hedge fund managers who were increasing their holdings considerably (or already accumulated large positions). 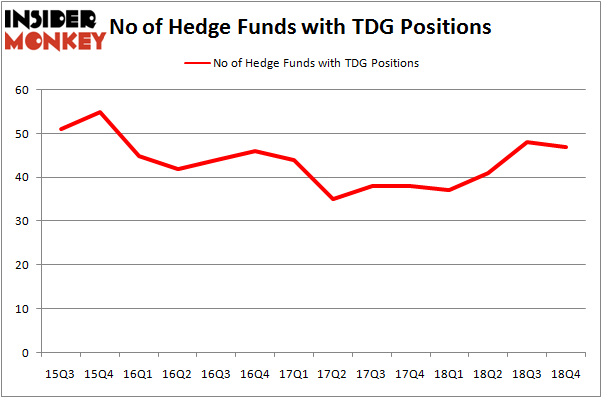 Among these funds, Tiger Global Management LLC held the most valuable stake in TransDigm Group Incorporated (NYSE:TDG), which was worth $702.6 million at the end of the third quarter. On the second spot was Stockbridge Partners which amassed $613.1 million worth of shares. Moreover, Windacre Partnership, Lone Pine Capital, and SPO Advisory Corp were also bullish on TransDigm Group Incorporated (NYSE:TDG), allocating a large percentage of their portfolios to this stock.

Due to the fact that TransDigm Group Incorporated (NYSE:TDG) has witnessed falling interest from hedge fund managers, it’s easy to see that there were a few hedge funds who were dropping their entire stakes last quarter. It’s worth mentioning that Zach Schreiber’s Point State Capital dumped the biggest position of the 700 funds followed by Insider Monkey, valued at an estimated $38.3 million in stock. Scott Phillips’s fund, Latimer Light Capital, also said goodbye to its stock, about $17.5 million worth. These bearish behaviors are important to note, as aggregate hedge fund interest fell by 1 funds last quarter.

As you can see these stocks had an average of 29.75 hedge funds with bullish positions and the average amount invested in these stocks was $2018 million. That figure was $4062 million in TDG’s case. Palo Alto Networks Inc (NYSE:PANW) is the most popular stock in this table. On the other hand Credicorp Ltd. (NYSE:BAP) is the least popular one with only 14 bullish hedge fund positions. Compared to these stocks TransDigm Group Incorporated (NYSE:TDG) is more popular among hedge funds. Our calculations showed that top 15 most popular stocks among hedge funds returned 19.7% through March 15th and outperformed the S&P 500 ETF (SPY) by 6.6 percentage points. Hedge funds were also right about betting on TDG as the stock returned 29.4% and outperformed the market as well.