Were Hedge Funds Right About Flocking Into Synchrony Financial (SYF)?

Hedge funds are known to underperform the bull markets but that’s not because they are bad at investing. Truth be told, most hedge fund managers and other smaller players within this industry are very smart and skilled investors. Of course, they may also make wrong bets in some instances, but no one knows what the future holds and how market participants will react to the bountiful news that floods in each day. Hedge funds underperform because they are hedged. The Standard and Poor’s 500 Index returned approximately 13.1% in the first 2.5 months of this year (including dividend payments). Conversely, hedge funds’ top 15 large-cap stock picks generated a return of 19.7% during the same 2.5-month period, with 93% of these stock picks outperforming the broader market benchmark. An average long/short hedge fund returned only 5% due to the hedges they implement and the large fees they charge. Our research covering the last 18 years indicates that investors can outperform the market by imitating hedge funds’ stock picks rather than directly investing in hedge funds. That’s why we believe it isn’t a waste of time to check out hedge fund sentiment before you invest in a stock like Synchrony Financial (NYSE:SYF).

Is Synchrony Financial (NYSE:SYF) a healthy stock for your portfolio? The smart money is buying. The number of bullish hedge fund positions improved by 5 lately. Our calculations also showed that SYF isn’t among the 30 most popular stocks among hedge funds. SYF was in 40 hedge funds’ portfolios at the end of the fourth quarter of 2018. There were 35 hedge funds in our database with SYF holdings at the end of the previous quarter.

At the end of the fourth quarter, a total of 40 of the hedge funds tracked by Insider Monkey were long this stock, a change of 14% from the second quarter of 2018. On the other hand, there were a total of 39 hedge funds with a bullish position in SYF a year ago. With the smart money’s positions undergoing their usual ebb and flow, there exists an “upper tier” of key hedge fund managers who were boosting their stakes substantially (or already accumulated large positions). 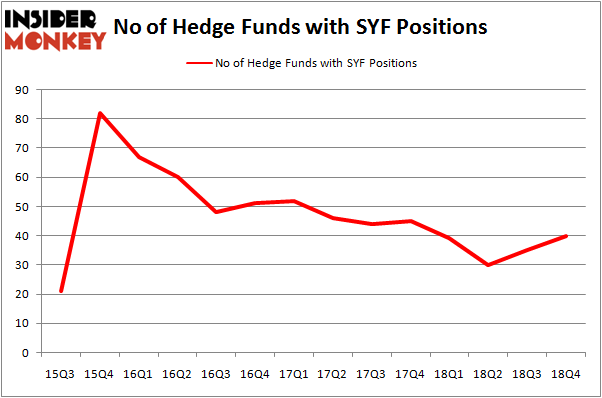 The largest stake in Synchrony Financial (NYSE:SYF) was held by Berkshire Hathaway, which reported holding $488 million worth of stock at the end of September. It was followed by Citadel Investment Group with a $421 million position. Other investors bullish on the company included Baupost Group, King Street Capital, and AQR Capital Management.

As one would reasonably expect, key money managers were leading the bulls’ herd. Renaissance Technologies, managed by Jim Simons, established the largest position in Synchrony Financial (NYSE:SYF). Renaissance Technologies had $69.1 million invested in the company at the end of the quarter. Daniel Johnson’s Gillson Capital also made a $19.3 million investment in the stock during the quarter. The other funds with brand new SYF positions are Richard Rubin’s Hawkeye Capital, Matthew Tewksbury’s Stevens Capital Management, and Matthew Knauer and Mina Faltas’s Nokota Management.

As you can see these stocks had an average of 23.75 hedge funds with bullish positions and the average amount invested in these stocks was $1327 million. That figure was $2307 million in SYF’s case. Expedia Group, Inc. (NASDAQ:EXPE) is the most popular stock in this table. On the other hand Shinhan Financial Group Co., Ltd. (NYSE:SHG) is the least popular one with only 7 bullish hedge fund positions. Compared to these stocks Synchrony Financial (NYSE:SYF) is more popular among hedge funds. Our calculations showed that top 15 most popular stocks among hedge funds returned 19.7% through March 15th and outperformed the S&P 500 ETF (SPY) by 6.6 percentage points. Hedge funds were also right about betting on SYF as the stock returned 43% and outperformed the market by a huge margin.

Were Hedge Funds Right About Ditching V.F. Corporation (VFC)
Monthly Newsletter Strategy
Download a free copy of our newsletter and see the details inside!
Hedge Fund Resource Center
Related News
3 Stocks Value Investing Legend Seth Klarman Bought in Q3 (and 2 He Dumped) Synchrony Financial (SYF): Are Hedge Funds Right About This Stock? 4 Stocks Insiders and Warren Buffett Are Crazy About Smart Money’s Sagging Confidence in Synchrony Financial (SYF) Hits A New Low 25 Stocks Billionaires Are Piling On 34 Key Stories That You Should Read To Know How Financial Markets Are Doing Today Why These Billionaire Seth Klarman’s Stock Picks Deserve Your Attention Hedge Funds Have Never Been This Bullish On Visa Inc (V) Ten of the Most Common Addictions 13 African Countries with the Largest White Population in 2018
Billionaire Hedge Funds