Were Hedge Funds Right About Flocking Into Switch, Inc. (SWCH) ?

At Insider Monkey, we pore over the filings of nearly 750 top investment firms every quarter, a process we have now completed for the latest reporting period. The data we’ve gathered as a result gives us access to a wealth of collective knowledge based on these firms’ portfolio holdings as of December 31. In this article, we will use that wealth of knowledge to determine whether or not Switch, Inc. (NYSE:SWCH) makes for a good investment right now.

Switch, Inc. (NYSE:SWCH) investors should pay attention to an increase in support from the world’s most elite money managers in recent months. SWCH was in 14 hedge funds’ portfolios at the end of December. There were 12 hedge funds in our database with SWCH holdings at the end of the previous quarter. Our calculations also showed that SWCH isn’t among the 30 most popular stocks among hedge funds.

What have hedge funds been doing with Switch, Inc. (NYSE:SWCH)?

Heading into the first quarter of 2019, a total of 14 of the hedge funds tracked by Insider Monkey were long this stock, a change of 17% from the second quarter of 2018. On the other hand, there were a total of 11 hedge funds with a bullish position in SWCH a year ago. With the smart money’s sentiment swirling, there exists an “upper tier” of noteworthy hedge fund managers who were increasing their holdings considerably (or already accumulated large positions). 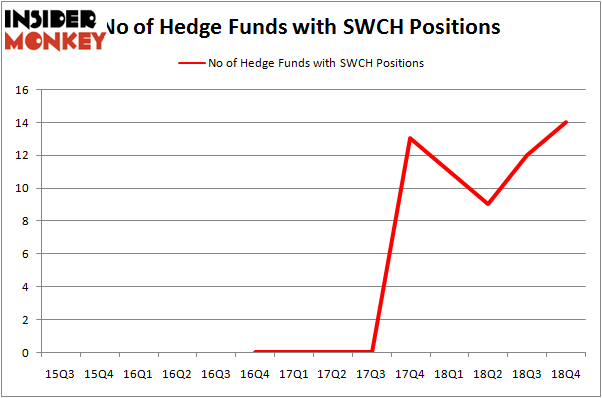 With a general bullishness amongst the heavyweights, some big names were leading the bulls’ herd. Rima Senvest Management, managed by Richard Mashaal, established the most outsized position in Switch, Inc. (NYSE:SWCH). Rima Senvest Management had $8.2 million invested in the company at the end of the quarter. Greg Poole’s Echo Street Capital Management also made a $6.3 million investment in the stock during the quarter. The other funds with brand new SWCH positions are Jim Simons’s Renaissance Technologies, John Overdeck and David Siegel’s Two Sigma Advisors, and Minhua Zhang’s Weld Capital Management.

As you can see these stocks had an average of 17 hedge funds with bullish positions and the average amount invested in these stocks was $160 million. That figure was $107 million in SWCH’s case. Dave & Buster’s Entertainment, Inc. (NASDAQ:PLAY) is the most popular stock in this table. On the other hand IAMGOLD Corporation (NYSE:IAG) is the least popular one with only 14 bullish hedge fund positions. Compared to these stocks Switch, Inc. (NYSE:SWCH) is even less popular than IAG. Hedge funds clearly dropped the ball on SWCH as the stock delivered strong returns, though hedge funds’ consensus picks still generated respectable returns. Our calculations showed that top 15 most popular stocks) among hedge funds returned 24.2% through April 22nd and outperformed the S&P 500 ETF (SPY) by more than 7 percentage points. A small number of hedge funds were also right about betting on SWCH as the stock returned 54.4% and outperformed the market by an even larger margin.