Does Silicon Laboratories Inc. (NASDAQ:SLAB) represent a good buying opportunity at the moment? Let’s quickly check the hedge fund interest towards the company. Hedge fund firms constantly search out bright intellectuals and highly-experienced employees and throw away millions of dollars on satellite photos and other research activities, so it is no wonder why they tend to generate millions in profits each year. It is also true that some hedge fund players fail inconceivably on some occasions, but net net their stock picks have been generating superior risk-adjusted returns on average over the years.

Silicon Laboratories Inc. (NASDAQ:SLAB) has experienced an increase in enthusiasm from smart money in recent months. Our calculations also showed that SLAB isn’t among the 30 most popular stocks among hedge funds (view the video below). 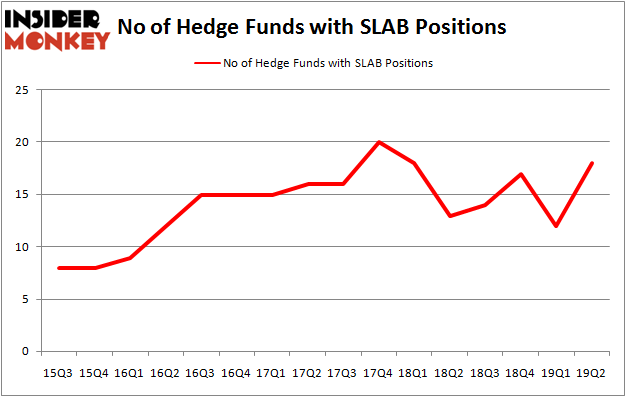 How have hedgies been trading Silicon Laboratories Inc. (NASDAQ:SLAB)?

Heading into the third quarter of 2019, a total of 18 of the hedge funds tracked by Insider Monkey were long this stock, a change of 50% from the first quarter of 2019. On the other hand, there were a total of 13 hedge funds with a bullish position in SLAB a year ago. With hedgies’ sentiment swirling, there exists an “upper tier” of notable hedge fund managers who were adding to their holdings considerably (or already accumulated large positions).

The largest stake in Silicon Laboratories Inc. (NASDAQ:SLAB) was held by Carlson Capital, which reported holding $14.2 million worth of stock at the end of March. It was followed by Citadel Investment Group with a $11.5 million position. Other investors bullish on the company included Millennium Management, D E Shaw, and Polar Capital.

Consequently, key hedge funds have been driving this bullishness. Polar Capital, managed by Brian Ashford-Russell and Tim Woolley, created the largest position in Silicon Laboratories Inc. (NASDAQ:SLAB). Polar Capital had $7.1 million invested in the company at the end of the quarter. Renaissance Technologies also made a $7 million investment in the stock during the quarter. The following funds were also among the new SLAB investors: Noam Gottesman’s GLG Partners, Dmitry Balyasny’s Balyasny Asset Management, and Charles Davidson and Joseph Jacobs’s Wexford Capital.

As you can see these stocks had an average of 19.5 hedge funds with bullish positions and the average amount invested in these stocks was $364 million. That figure was $74 million in SLAB’s case. The Wendy’s Company (NASDAQ:WEN) is the most popular stock in this table. On the other hand Highwoods Properties Inc (NYSE:HIW) is the least popular one with only 13 bullish hedge fund positions. Silicon Laboratories Inc. (NASDAQ:SLAB) is not the least popular stock in this group but hedge fund interest is still below average. Our calculations showed that top 20 most popular stocks among hedge funds returned 24.4% in 2019 through September 30th and outperformed the S&P 500 ETF (SPY) by 4 percentage points. A small number of hedge funds were also right about betting on SLAB as the stock returned 7.7% during the same time frame and outperformed the market by an even larger margin.