Were Hedge Funds Right About Flocking Into Rapid7 Inc (RPD) ?

Is Rapid7 Inc (NASDAQ:RPD) a good stock to buy right now? We at Insider Monkey like to examine what billionaires and hedge funds think of a company before doing days of research on it. Given their 2 and 20 payment structure, hedge funds have more incentives and resources than the average investor. The funds have access to expert networks and get tips from industry insiders. They also have numerous Ivy League graduates and MBAs. Like everyone else, hedge funds perform miserably at times, but their consensus picks have historically outperformed the market after risk adjustments.

Rapid7 Inc (NASDAQ:RPD) shareholders have witnessed an increase in activity from the world’s largest hedge funds recently. RPD was in 24 hedge funds’ portfolios at the end of December. There were 17 hedge funds in our database with RPD holdings at the end of the previous quarter. Our calculations also showed that RPD isn’t among the 30 most popular stocks among hedge funds.

What does the smart money think about Rapid7 Inc (NASDAQ:RPD)?

Heading into the first quarter of 2019, a total of 24 of the hedge funds tracked by Insider Monkey were long this stock, a change of 41% from the previous quarter. By comparison, 16 hedge funds held shares or bullish call options in RPD a year ago. With hedge funds’ positions undergoing their usual ebb and flow, there exists a select group of key hedge fund managers who were adding to their holdings considerably (or already accumulated large positions). 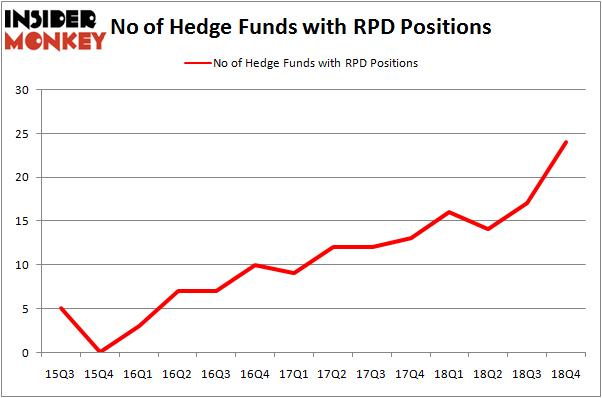 When looking at the institutional investors followed by Insider Monkey, SQN Investors, managed by Amish Mehta, holds the largest position in Rapid7 Inc (NASDAQ:RPD). SQN Investors has a $48.9 million position in the stock, comprising 5.7% of its 13F portfolio. Sitting at the No. 2 spot is Point72 Asset Management, managed by Steve Cohen, which holds a $45.9 million position; 0.2% of its 13F portfolio is allocated to the stock. Remaining professional money managers that hold long positions consist of Ken Griffin’s Citadel Investment Group, Principal Global Investors’s Columbus Circle Investors and Jim Simons’s Renaissance Technologies.

As industrywide interest jumped, some big names have jumped into Rapid7 Inc (NASDAQ:RPD) headfirst. North Peak Capital, managed by Michael Kahan and Jeremy Kahan, assembled the most valuable position in Rapid7 Inc (NASDAQ:RPD). North Peak Capital had $4.7 million invested in the company at the end of the quarter. Israel Englander’s Millennium Management also made a $4.4 million investment in the stock during the quarter. The other funds with brand new RPD positions are Paul Marshall and Ian Wace’s Marshall Wace LLP, Dipak Patel’s Alight Capital, and Philip Hempleman’s Ardsley Partners.

As you can see these stocks had an average of 16.5 hedge funds with bullish positions and the average amount invested in these stocks was $136 million. That figure was $256 million in RPD’s case. Cubic Corporation (NYSE:CUB) is the most popular stock in this table. On the other hand Chesapeake Lodging Trust (NYSE:CHSP) is the least popular one with only 12 bullish hedge fund positions. Compared to these stocks Rapid7 Inc (NASDAQ:RPD) is more popular among hedge funds. Our calculations showed that top 15 most popular stocks) among hedge funds returned 24.2% through April 22nd and outperformed the S&P 500 ETF (SPY) by more than 7 percentage points. Hedge funds were also right about betting on RPD as the stock returned 63.4% and outperformed the market by an even larger margin. Hedge funds were clearly right about piling into this stock relative to other stocks with similar market capitalizations.