Is Public Service Enterprise Group Incorporated (NYSE:PEG) an outstanding stock to buy now? Investors who are in the know are getting more optimistic. The number of long hedge fund positions inched up by 3 lately. Our calculations also showed that PEG isn’t among the 30 most popular stocks among hedge funds.

Heading into the first quarter of 2019, a total of 30 of the hedge funds tracked by Insider Monkey were bullish on this stock, a change of 11% from one quarter earlier. Below, you can check out the change in hedge fund sentiment towards PEG over the last 14 quarters. So, let’s examine which hedge funds were among the top holders of the stock and which hedge funds were making big moves. 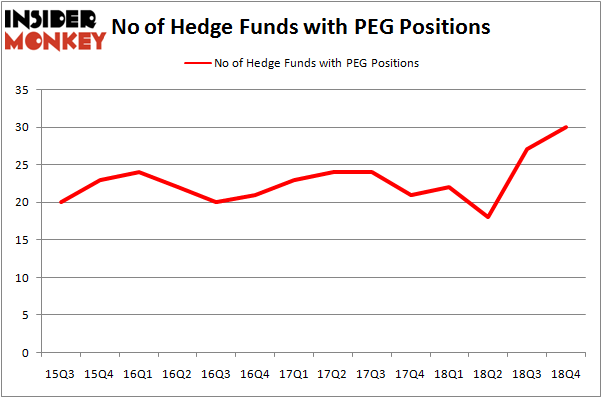 Among these funds, AQR Capital Management held the most valuable stake in Public Service Enterprise Group Incorporated (NYSE:PEG), which was worth $244.2 million at the end of the third quarter. On the second spot was Millennium Management which amassed $164.1 million worth of shares. Moreover, Adage Capital Management, Zimmer Partners, and Renaissance Technologies were also bullish on Public Service Enterprise Group Incorporated (NYSE:PEG), allocating a large percentage of their portfolios to this stock.

Consequently, key money managers have been driving this bullishness. ExodusPoint Capital, managed by Michael Gelband, created the most valuable position in Public Service Enterprise Group Incorporated (NYSE:PEG). ExodusPoint Capital had $20.8 million invested in the company at the end of the quarter. Peter Rathjens, Bruce Clarke and John Campbell’s Arrowstreet Capital also made a $11.8 million investment in the stock during the quarter. The other funds with brand new PEG positions are Steve Cohen’s Point72 Asset Management, Ken Griffin’s Citadel Investment Group, and Ben Levine, Andrew Manuel and Stefan Renold’s LMR Partners.

As you can see these stocks had an average of 18.25 hedge funds with bullish positions and the average amount invested in these stocks was $1125 million. That figure was $1077 million in PEG’s case. Southwest Airlines Co. (NYSE:LUV) is the most popular stock in this table. On the other hand Perusahaan Perseroan (Persero) PT Telekomunikasi Indonesia Tbk (NYSE:TLK) is the least popular one with only 6 bullish hedge fund positions. Public Service Enterprise Group Incorporated (NYSE:PEG) is not the most popular stock in this group but hedge fund interest is still above average. Our calculations showed that top 15 most popular stocks among hedge funds returned 19.7% through March 15th and outperformed the S&P 500 ETF (SPY) by 6.6 percentage points. Hedge funds were also right about betting on PEG, though not to the same extent, as the stock returned 15.7% and outperformed the market as well.