Were Hedge Funds Right About Flocking Into Proofpoint Inc (PFPT) ?

Insider Monkey finished processing more than 700 13F filings submitted by hedge funds and prominent investors. These filings show these funds’ portfolio positions as of December 31st, 2018. In this article we are going to take a look at smart money sentiment towards Proofpoint Inc (NASDAQ:PFPT).

Proofpoint Inc (NASDAQ:PFPT) was in 27 hedge funds’ portfolios at the end of the fourth quarter of 2018. PFPT has seen an increase in support from the world’s most elite money managers of late. There were 25 hedge funds in our database with PFPT holdings at the end of the previous quarter. Our calculations also showed that PFPT isn’t among the 30 most popular stocks among hedge funds.

At the end of the fourth quarter, a total of 27 of the hedge funds tracked by Insider Monkey were bullish on this stock, a change of 8% from the previous quarter. The graph below displays the number of hedge funds with bullish position in PFPT over the last 14 quarters. With hedgies’ capital changing hands, there exists a select group of notable hedge fund managers who were boosting their stakes significantly (or already accumulated large positions). 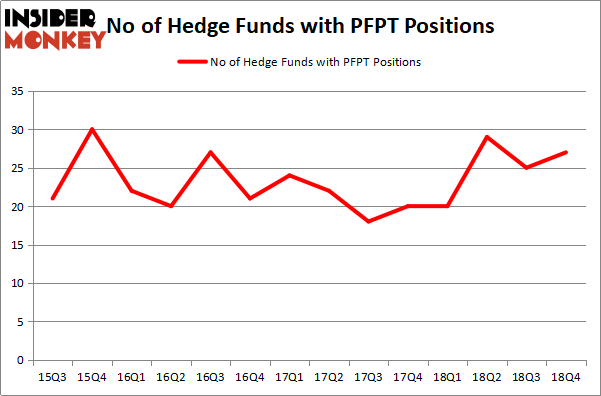 The largest stake in Proofpoint Inc (NASDAQ:PFPT) was held by Holocene Advisors, which reported holding $129.3 million worth of stock at the end of September. It was followed by Alyeska Investment Group with a $63.4 million position. Other investors bullish on the company included Tremblant Capital, Millennium Management, and Two Sigma Advisors.

With a general bullishness amongst the heavyweights, some big names have been driving this bullishness. Holocene Advisors, managed by Brandon Haley, assembled the most outsized position in Proofpoint Inc (NASDAQ:PFPT). Holocene Advisors had $129.3 million invested in the company at the end of the quarter. Robert G. Moses’s RGM Capital also made a $39.5 million investment in the stock during the quarter. The following funds were also among the new PFPT investors: Glen Kacher’s Light Street Capital, Jack Ripsteen’s Potrero Capital Research, and Andrew Feldstein and Stephen Siderow’s Blue Mountain Capital.

As you can see these stocks had an average of 25 hedge funds with bullish positions and the average amount invested in these stocks was $744 million. That figure was $501 million in PFPT’s case. Caesars Entertainment Corp (NASDAQ:CZR) is the most popular stock in this table. On the other hand Banco de Chile (NYSE:BCH) is the least popular one with only 4 bullish hedge fund positions. Proofpoint Inc (NASDAQ:PFPT) is not the most popular stock in this group but hedge fund interest is still above average. Our calculations showed that top 15 most popular stocks) among hedge funds returned 24.2% through April 22nd and outperformed the S&P 500 ETF (SPY) by more than 7 percentage points. Hedge funds were also right about betting on PFPT as the stock returned 47.9% and outperformed the market by an even larger margin. Hedge funds were rewarded for their relative bullishness.

Were Hedge Funds Right About Piling Into Owens Corning (OC)?
Monthly Newsletter Strategy
Download a free copy of our newsletter and see the details inside!
Hedge Fund Resource Center
Related News
Here is What Hedge Funds Think About Proofpoint Inc (PFPT) Here’s Why These Five Stocks Are Trending Do Hedge Funds Love Proofpoint Inc (PFPT)? Proofpoint Inc (PFPT), Cornerstone OnDemand, Inc. (CSOD) & Two Other Stocks: Was This Fund Right to Bet on Them? Reynolds American, Inc. (RAI), MGP Ingredients Inc (MGPI), and More: Here’s What Analysts Had To Say About These Stocks in the Spotlight Here’s Why Time Warner, Everyday Health, Proofpoint, and More Are On the Move Pandora, PayPal, Visa, and Other Stocks in Spotlight on Friday 20 Clever Bumble Bios for Guys 15 Most Physically Demanding Olympic Sports Hedge Funds Have Never Been This Bullish On Visa Inc (V)
Billionaire Hedge Funds