Were Hedge Funds Right About Flocking Into Plantronics, Inc. (PLT) ?

Out of thousands of stocks that are currently traded on the market, it is difficult to identify those that will really generate strong returns. Hedge funds and institutional investors spend millions of dollars on analysts with MBAs and PhDs, who are industry experts and well connected to other industry and media insiders on top of that. Individual investors can piggyback the hedge funds employing these talents and can benefit from their vast resources and knowledge in that way. We analyze quarterly 13F filings of nearly 750 hedge funds and, by looking at the smart money sentiment that surrounds a stock, we can determine whether it has the potential to beat the market over the long-term. Therefore, let’s take a closer look at what smart money thinks about Plantronics, Inc. (NYSE:PLT).

Plantronics, Inc. (NYSE:PLT) was in 16 hedge funds’ portfolios at the end of December. PLT has seen a decrease in enthusiasm from smart money lately. There were 25 hedge funds in our database with PLT holdings at the end of the previous quarter. Our calculations also showed that PLT isn’t among the 30 most popular stocks among hedge funds.

At the end of the fourth quarter, a total of 16 of the hedge funds tracked by Insider Monkey were bullish on this stock, a change of -36% from one quarter earlier. On the other hand, there were a total of 17 hedge funds with a bullish position in PLT a year ago. With hedgies’ sentiment swirling, there exists an “upper tier” of notable hedge fund managers who were increasing their holdings substantially (or already accumulated large positions). 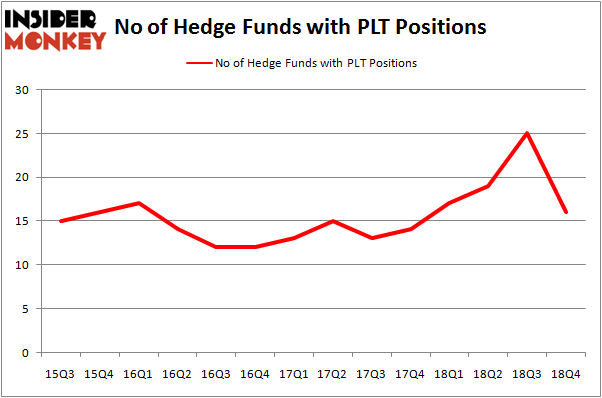 According to Insider Monkey’s hedge fund database, Renaissance Technologies, managed by Jim Simons, holds the largest position in Plantronics, Inc. (NYSE:PLT). Renaissance Technologies has a $45.3 million position in the stock, comprising less than 0.1%% of its 13F portfolio. Coming in second is Millennium Management, managed by Israel Englander, which holds a $9.3 million position; less than 0.1%% of its 13F portfolio is allocated to the company. Other professional money managers that hold long positions consist of Ken Griffin’s Citadel Investment Group, D. E. Shaw’s D E Shaw and David Costen Haley’s HBK Investments.

Since Plantronics, Inc. (NYSE:PLT) has experienced bearish sentiment from the entirety of the hedge funds we track, it’s easy to see that there were a few fund managers who sold off their full holdings by the end of the third quarter. Intriguingly, Noam Gottesman’s GLG Partners cut the biggest investment of all the hedgies watched by Insider Monkey, worth close to $21.6 million in stock, and Joel Greenblatt’s Gotham Asset Management was right behind this move, as the fund sold off about $3.8 million worth. These transactions are interesting, as aggregate hedge fund interest was cut by 9 funds by the end of the third quarter.

Let’s now take a look at hedge fund activity in other stocks – not necessarily in the same industry as Plantronics, Inc. (NYSE:PLT) but similarly valued. These stocks are Autolus Therapeutics plc (NASDAQ:AUTL), Mallinckrodt plc (NYSE:MNK), Instructure, Inc. (NYSE:INST), and Aircastle Limited (NYSE:AYR). All of these stocks’ market caps are similar to PLT’s market cap.

As you can see these stocks had an average of 15.75 hedge funds with bullish positions and the average amount invested in these stocks was $259 million. That figure was $72 million in PLT’s case. Mallinckrodt plc (NYSE:MNK) is the most popular stock in this table. On the other hand Autolus Therapeutics plc (NASDAQ:AUTL) is the least popular one with only 6 bullish hedge fund positions. Plantronics, Inc. (NYSE:PLT) is not the most popular stock in this group but hedge fund interest is still above average. Our calculations showed that top 15 most popular stocks) among hedge funds returned 24.2% through April 22nd and outperformed the S&P 500 ETF (SPY) by more than 7 percentage points. Hedge funds were also right about betting on PLT as the stock returned 60.2% and outperformed the market by an even larger margin. Hedge funds were rewarded for their relative bullishness.