Is Pilgrim’s Pride Corporation (NASDAQ:PPC) a worthy investment today? Prominent investors are taking an optimistic view. The number of long hedge fund positions improved by 1 in recent months. Our calculations also showed that PPC isn’t among the 30 most popular stocks among hedge funds. PPC was in 17 hedge funds’ portfolios at the end of December. There were 16 hedge funds in our database with PPC holdings at the end of the previous quarter.

How have hedgies been trading Pilgrim’s Pride Corporation (NASDAQ:PPC)?

At the end of the fourth quarter, a total of 17 of the hedge funds tracked by Insider Monkey were long this stock, a change of 6% from the previous quarter. Below, you can check out the change in hedge fund sentiment towards PPC over the last 14 quarters. With hedge funds’ capital changing hands, there exists a select group of noteworthy hedge fund managers who were upping their holdings meaningfully (or already accumulated large positions). 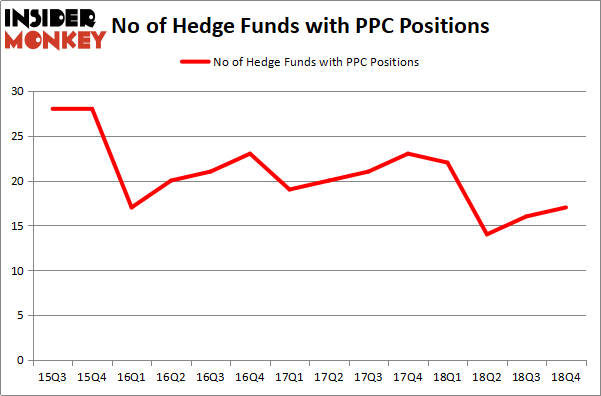 The largest stake in Pilgrim’s Pride Corporation (NASDAQ:PPC) was held by AQR Capital Management, which reported holding $31.1 million worth of stock at the end of September. It was followed by Millennium Management with a $26.5 million position. Other investors bullish on the company included Arrowstreet Capital, Gotham Asset Management, and Citadel Investment Group.

With a general bullishness amongst the heavyweights, key hedge funds have jumped into Pilgrim’s Pride Corporation (NASDAQ:PPC) headfirst. D E Shaw, managed by D. E. Shaw, assembled the most valuable position in Pilgrim’s Pride Corporation (NASDAQ:PPC). D E Shaw had $4.7 million invested in the company at the end of the quarter. Steve Cohen’s Point72 Asset Management also made a $3.5 million investment in the stock during the quarter. The following funds were also among the new PPC investors: Minhua Zhang’s Weld Capital Management, Andrew Feldstein and Stephen Siderow’s Blue Mountain Capital, and Gavin Saitowitz and Cisco J. del Valle’s Springbok Capital.

As you can see these stocks had an average of 17.75 hedge funds with bullish positions and the average amount invested in these stocks was $233 million. That figure was $111 million in PPC’s case. BlackBerry Limited (NYSE:BB) is the most popular stock in this table. On the other hand 51job, Inc. (NASDAQ:JOBS) is the least popular one with only 13 bullish hedge fund positions. Pilgrim’s Pride Corporation (NASDAQ:PPC) is not the least popular stock in this group but hedge fund interest is still below average. Our calculations showed that top 15 most popular stocks) among hedge funds returned 24.2% through April 22nd and outperformed the S&P 500 ETF (SPY) by more than 7 percentage points. A small number of hedge funds were also right about betting on PPC as the stock returned 64.5% and outperformed the market by an even larger margin.