Were Hedge Funds Right About Piling Into Paychex, Inc. (PAYX)?

Hedge fund interest in Paychex, Inc. (NASDAQ:PAYX) shares was flat at the end of last quarter but that’s because they got into the stock during Q3. This isn’t necessarily a negative indicator. The level and the change in hedge fund popularity aren’t the only variables you need to analyze to decipher hedge funds’ perspectives. A stock may witness a boost in popularity but it may still be less popular than similarly priced stocks. That’s why at the end of this article we will examine companies such as Halliburton Company (NYSE:HAL), General Mills, Inc. (NYSE:GIS), and Square, Inc. (NYSE:SQ) to gather more data points.

To most market participants, hedge funds are viewed as unimportant, outdated financial vehicles of the past. While there are over 8000 funds with their doors open at the moment, Our researchers hone in on the crème de la crème of this group, around 750 funds. These investment experts administer the majority of the hedge fund industry’s total capital, and by tailing their top equity investments, Insider Monkey has uncovered various investment strategies that have historically beaten the broader indices. Insider Monkey’s flagship hedge fund strategy outrun the S&P 500 index by nearly 5 percentage points per year since its inception in May 2014 through early November 2018. We were able to generate large returns even by identifying short candidates. Our portfolio of short stocks lost 27.5% since February 2017 (through March 12th) even though the market was up nearly 25% during the same period. We just shared a list of 6 short targets in our latest quarterly update and they are already down an average of 6% in less than a month.

What have hedge funds been doing with Paychex, Inc. (NASDAQ:PAYX)? 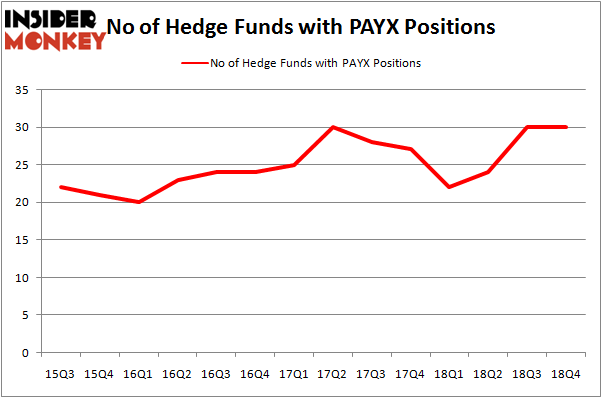 The largest stake in Paychex, Inc. (NASDAQ:PAYX) was held by Select Equity Group, which reported holding $391.9 million worth of stock at the end of September. It was followed by Arrowstreet Capital with a $165.3 million position. Other investors bullish on the company included Citadel Investment Group, Element Capital Management, and Renaissance Technologies.

Judging by the fact that Paychex, Inc. (NASDAQ:PAYX) has faced declining sentiment from the smart money, it’s safe to say that there lies a certain “tier” of hedgies that decided to sell off their full holdings by the end of the third quarter. Interestingly, Israel Englander’s Millennium Management sold off the biggest investment of all the hedgies monitored by Insider Monkey, worth an estimated $25.8 million in stock. Bruce Kovner’s fund, Caxton Associates LP, also said goodbye to its stock, about $0.9 million worth. These moves are important to note, as aggregate hedge fund interest stayed the same (this is a bearish signal in our experience).

As you can see these stocks had an average of 29 hedge funds with bullish positions and the average amount invested in these stocks was $471 million. That figure was $947 million in PAYX’s case. General Mills, Inc. (NYSE:GIS) is the most popular stock in this table. On the other hand Wipro Limited (NYSE:WIT) is the least popular one with only 10 bullish hedge fund positions. Paychex, Inc. (NASDAQ:PAYX) is not the most popular stock in this group but hedge fund interest is still above average. Our calculations showed that top 15 most popular stocks among hedge funds returned 19.7% through March 15th and outperformed the S&P 500 ETF (SPY) by 6.6 percentage points. Hedge funds were also right about betting on PAYX as the stock returned 22.6% recouping all of its Q4 losses and then some more.