Is Patterson-UTI Energy, Inc. (NASDAQ:PTEN) a good investment right now? We check hedge fund and billionaire investor sentiment before delving into hours of research. Hedge funds spend millions of dollars on Ivy League graduates, expert networks, and get tips from investment bankers and industry insiders. Sure they sometimes fail miserably but historically their consensus stock picks outperformed the market after adjusting for known risk factors.

Is Patterson-UTI Energy, Inc. (NASDAQ:PTEN) worth your attention right now? The smart money is buying. The number of long hedge fund bets inched up by 8 in recent months. Our calculations also showed that PTEN isn’t among the 30 most popular stocks among hedge funds.

How have hedgies been trading Patterson-UTI Energy, Inc. (NASDAQ:PTEN)?

At Q4’s end, a total of 39 of the hedge funds tracked by Insider Monkey were bullish on this stock, a change of 26% from the second quarter of 2018. On the other hand, there were a total of 37 hedge funds with a bullish position in PTEN a year ago. With hedge funds’ capital changing hands, there exists a few notable hedge fund managers who were adding to their holdings considerably (or already accumulated large positions). 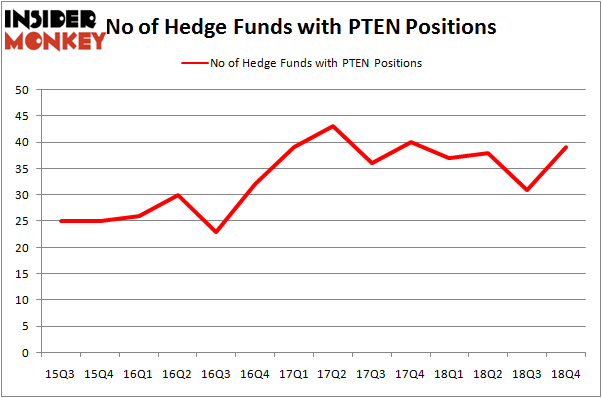 Among these funds, Millennium Management held the most valuable stake in Patterson-UTI Energy, Inc. (NASDAQ:PTEN), which was worth $35.4 million at the end of the third quarter. On the second spot was AQR Capital Management which amassed $31.7 million worth of shares. Moreover, Point72 Asset Management, Citadel Investment Group, and Kahn Brothers were also bullish on Patterson-UTI Energy, Inc. (NASDAQ:PTEN), allocating a large percentage of their portfolios to this stock.

Consequently, key hedge funds have been driving this bullishness. Point72 Asset Management, managed by Steve Cohen, created the most outsized call position in Patterson-UTI Energy, Inc. (NASDAQ:PTEN). Point72 Asset Management had $5.2 million invested in the company at the end of the quarter. Joe Milano’s Greenhouse Funds also made a $4.2 million investment in the stock during the quarter. The other funds with brand new PTEN positions are Jim Simons’s Renaissance Technologies, Brandon Haley’s Holocene Advisors, and John Overdeck and David Siegel’s Two Sigma Advisors.

Let’s check out hedge fund activity in other stocks – not necessarily in the same industry as Patterson-UTI Energy, Inc. (NASDAQ:PTEN) but similarly valued. We will take a look at frontdoor, inc. (NASDAQ:FTDR), InterDigital, Inc. (NASDAQ:IDCC), Conduent Incorporated (NYSE:CNDT), and Sunoco LP (NYSE:SUN). This group of stocks’ market valuations are similar to PTEN’s market valuation.

As you can see these stocks had an average of 21.75 hedge funds with bullish positions and the average amount invested in these stocks was $207 million. That figure was $236 million in PTEN’s case. Conduent Incorporated (NYSE:CNDT) is the most popular stock in this table. On the other hand Sunoco LP (NYSE:SUN) is the least popular one with only 7 bullish hedge fund positions. Compared to these stocks Patterson-UTI Energy, Inc. (NASDAQ:PTEN) is more popular among hedge funds. Our calculations showed that top 15 most popular stocks) among hedge funds returned 24.2% through April 22nd and outperformed the S&P 500 ETF (SPY) by more than 7 percentage points. Hedge funds were also right about betting on PTEN as the stock returned 56.6% and outperformed the market by an even larger margin. Hedge funds were clearly right about piling into this stock relative to other stocks with similar market capitalizations.