The market has been volatile in the last few months as the Federal Reserve continued its rate cuts and uncertainty looms over trade negotiations with China. Small cap stocks have been hit hard as a result, as the Russell 2000 ETF (IWM) has underperformed the larger S&P 500 ETF (SPY) by more than 10 percentage points over the last 12 months. SEC filings and hedge fund investor letters indicate that the smart money seems to be paring back their overall long exposure since summer months, though some funds increased their exposure dramatically at the end of Q2 and the beginning of Q3. In this article, we analyze what the smart money thinks of Parsley Energy Inc (NYSE:PE) and find out how it is affected by hedge funds’ moves.

Is Parsley Energy Inc (NYSE:PE) a buy right now? Investors who are in the know are becoming hopeful. The number of long hedge fund positions advanced by 2 in recent months. Our calculations also showed that PE isn’t among the 30 most popular stocks among hedge funds (view the video below).

If you’d ask most traders, hedge funds are seen as unimportant, outdated financial tools of yesteryear. While there are greater than 8000 funds in operation at present, We choose to focus on the crème de la crème of this group, about 750 funds. Most estimates calculate that this group of people command bulk of the smart money’s total capital, and by tracking their top picks, Insider Monkey has uncovered a few investment strategies that have historically defeated the broader indices. Insider Monkey’s flagship hedge fund strategy outstripped the S&P 500 index by around 5 percentage points a year since its inception in May 2014. We were able to generate large returns even by identifying short candidates. Our portfolio of short stocks lost 25.7% since February 2017 (through September 30th) even though the market was up more than 33% during the same period. We just shared a list of 10 short targets in our latest quarterly update . 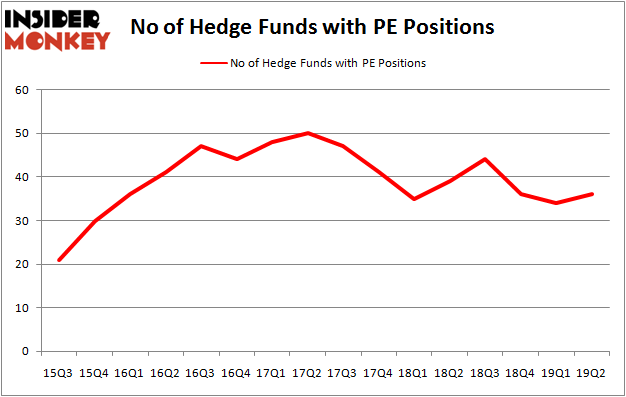 Unlike some fund managers who are betting on Dow reaching 40000 in a year, our long-short investment strategy doesn’t rely on bull markets to deliver double digit returns. We only rely on hedge fund buy/sell signals. Let’s take a gander at the fresh hedge fund action regarding Parsley Energy Inc (NYSE:PE).

Heading into the third quarter of 2019, a total of 36 of the hedge funds tracked by Insider Monkey were bullish on this stock, a change of 6% from one quarter earlier. On the other hand, there were a total of 39 hedge funds with a bullish position in PE a year ago. With hedgies’ sentiment swirling, there exists an “upper tier” of noteworthy hedge fund managers who were upping their holdings considerably (or already accumulated large positions).

The largest stake in Parsley Energy Inc (NYSE:PE) was held by Adage Capital Management, which reported holding $201.1 million worth of stock at the end of March. It was followed by Citadel Investment Group with a $96.3 million position. Other investors bullish on the company included Luminus Management, Millennium Management, and York Capital Management.

As industrywide interest jumped, some big names were leading the bulls’ herd. York Capital Management, managed by James Dinan, created the most outsized position in Parsley Energy Inc (NYSE:PE). York Capital Management had $45 million invested in the company at the end of the quarter. Vince Maddi and Shawn Brennan’s SIR Capital Management also initiated a $34.1 million position during the quarter. The other funds with new positions in the stock are Steven Tananbaum’s GoldenTree Asset Management, Robert Polak’s Anchor Bolt Capital, and Clint Carlson’s Carlson Capital.