Monolithic Power Systems, Inc. (NASDAQ:MPWR) shareholders have witnessed an increase in enthusiasm from smart money of late. MPWR was in 23 hedge funds’ portfolios at the end of the second quarter of 2019. There were 20 hedge funds in our database with MPWR positions at the end of the previous quarter. Our calculations also showed that MPWR isn’t among the 30 most popular stocks among hedge funds (view the video below). 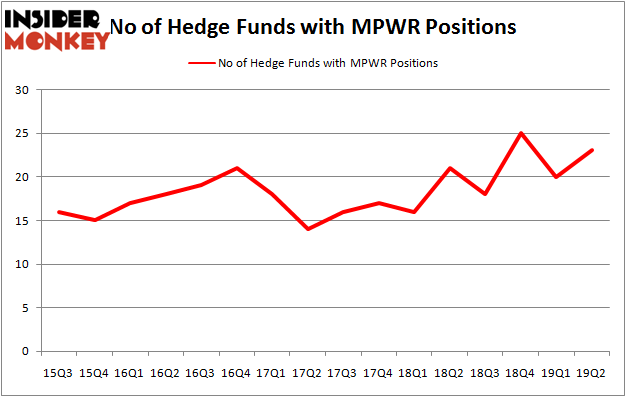 Unlike some fund managers who are betting on Dow reaching 40000 in a year, our long-short investment strategy doesn’t rely on bull markets to deliver double digit returns. We only rely on hedge fund buy/sell signals. Let’s go over the recent hedge fund action encompassing Monolithic Power Systems, Inc. (NASDAQ:MPWR).

Heading into the third quarter of 2019, a total of 23 of the hedge funds tracked by Insider Monkey held long positions in this stock, a change of 15% from the previous quarter. The graph below displays the number of hedge funds with bullish position in MPWR over the last 16 quarters. With hedgies’ sentiment swirling, there exists an “upper tier” of key hedge fund managers who were increasing their holdings considerably (or already accumulated large positions).

As one would reasonably expect, key money managers have jumped into Monolithic Power Systems, Inc. (NASDAQ:MPWR) headfirst. Renaissance Technologies, created the largest position in Monolithic Power Systems, Inc. (NASDAQ:MPWR). Renaissance Technologies had $9.4 million invested in the company at the end of the quarter. Anand Parekh’s Alyeska Investment Group also made a $9 million investment in the stock during the quarter. The other funds with new positions in the stock are Paul Marshall and Ian Wace’s Marshall Wace LLP, Philip Hempleman’s Ardsley Partners, and George Zweig, Shane Haas and Ravi Chander’s Signition LP.

As you can see these stocks had an average of 21 hedge funds with bullish positions and the average amount invested in these stocks was $302 million. That figure was $197 million in MPWR’s case. InterXion Holding NV (NYSE:INXN) is the most popular stock in this table. On the other hand Antero Midstream Corp (NYSE:AM) is the least popular one with only 15 bullish hedge fund positions. Monolithic Power Systems, Inc. (NASDAQ:MPWR) is not the most popular stock in this group but hedge fund interest is still above average. Our calculations showed that top 20 most popular stocks among hedge funds returned 24.4% in 2019 through September 30th and outperformed the S&P 500 ETF (SPY) by 4 percentage points. Hedge funds were also right about betting on MPWR as the stock returned 14.9% during the third quarter and outperformed the market. Hedge funds were rewarded for their relative bullishness.