Were Hedge Funds Right About Flocking Into MongoDB, Inc. (MDB) ?

Insider Monkey finished processing more than 700 13F filings submitted by hedge funds and prominent investors. These filings show these funds’ portfolio positions as of December 31st, 2018. What do these smart investors think about MongoDB, Inc. (NASDAQ:MDB)?

What does the smart money think about MongoDB, Inc. (NASDAQ:MDB)? 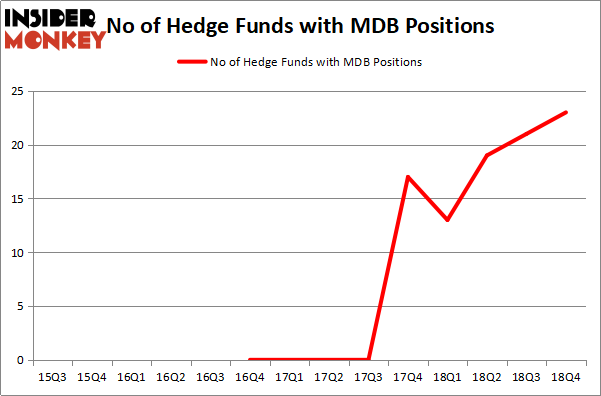 Let’s also examine hedge fund activity in other stocks – not necessarily in the same industry as MongoDB, Inc. (NASDAQ:MDB) but similarly valued. We will take a look at Curtiss-Wright Corp. (NYSE:CW), United States Cellular Corporation (NYSE:USM), Buckeye Partners, L.P. (NYSE:BPL), and LivaNova PLC (NASDAQ:LIVN). All of these stocks’ market caps are similar to MDB’s market cap.

As you can see these stocks had an average of 16 hedge funds with bullish positions and the average amount invested in these stocks was $237 million. That figure was $510 million in MDB’s case. LivaNova PLC (NASDAQ:LIVN) is the most popular stock in this table. On the other hand Buckeye Partners, L.P. (NYSE:BPL) is the least popular one with only 5 bullish hedge fund positions. Compared to these stocks MongoDB, Inc. (NASDAQ:MDB) is more popular among hedge funds. Our calculations showed that top 15 most popular stocks) among hedge funds returned 24.2% through April 22nd and outperformed the S&P 500 ETF (SPY) by more than 7 percentage points. Hedge funds were also right about betting on MDB as the stock returned 55.7% and outperformed the market by an even larger margin. Hedge funds were clearly right about piling into this stock relative to other stocks with similar market capitalizations.