Were Hedge Funds Right About Flocking Into Mercadolibre Inc (MELI) ?

Is Mercadolibre Inc (NASDAQ:MELI) a healthy stock for your portfolio? The smart money is turning bullish. The number of long hedge fund bets advanced by 4 in recent months. Our calculations also showed that MELI isn’t among the 30 most popular stocks among hedge funds. MELI was in 31 hedge funds’ portfolios at the end of the fourth quarter of 2018. There were 27 hedge funds in our database with MELI positions at the end of the previous quarter. 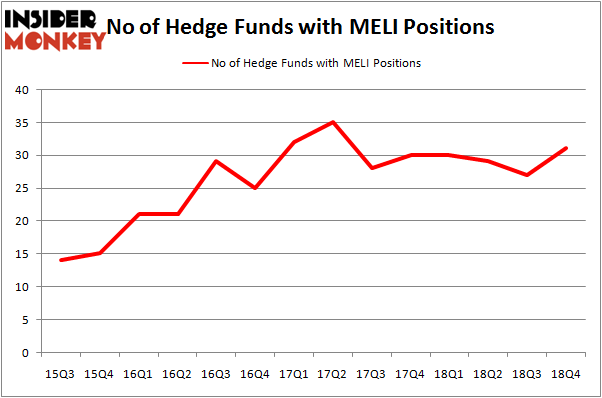 Among these funds, Alkeon Capital Management held the most valuable stake in Mercadolibre Inc (NASDAQ:MELI), which was worth $365 million at the end of the third quarter. On the second spot was Generation Investment Management which amassed $321 million worth of shares. Moreover, D1 Capital Partners, Lone Pine Capital, and Tiger Global Management LLC were also bullish on Mercadolibre Inc (NASDAQ:MELI), allocating a large percentage of their portfolios to this stock.

As you can see these stocks had an average of 34 hedge funds with bullish positions and the average amount invested in these stocks was $1993 million. That figure was $1208 million in MELI’s case. Vulcan Materials Company (NYSE:VMC) is the most popular stock in this table. On the other hand Franco-Nevada Corporation (NYSE:FNV) is the least popular one with only 23 bullish hedge fund positions. Mercadolibre Inc (NASDAQ:MELI) is not the least popular stock in this group but hedge fund interest is still below average. This is a slightly negative signal and we’d rather spend our time researching stocks that hedge funds are piling on. Our calculations showed that top 15 most popular stocks among hedge funds returned 19.7% through March 15th and outperformed the S&P 500 ETF (SPY) by 6.6 percentage points. Hedge funds were also right about betting on MELI as the stock returned 66.9% and outperformed the market as well.