Is Live Nation Entertainment, Inc. (NYSE:LYV) a bargain? Hedge funds are reducing their bets on the stock. The number of bullish hedge fund positions shrunk by 1 recently. Nevertheless, overall hedge fund sentiment towards the stock is still near its all time high.

At Q4’s end, a total of 37 of the hedge funds tracked by Insider Monkey held long positions in this stock, a change of -3% from one quarter earlier. On the other hand, there were a total of 31 hedge funds with a bullish position in LYV a year ago. With hedgies’ capital changing hands, there exists an “upper tier” of notable hedge fund managers who were adding to their stakes considerably (or already accumulated large positions). 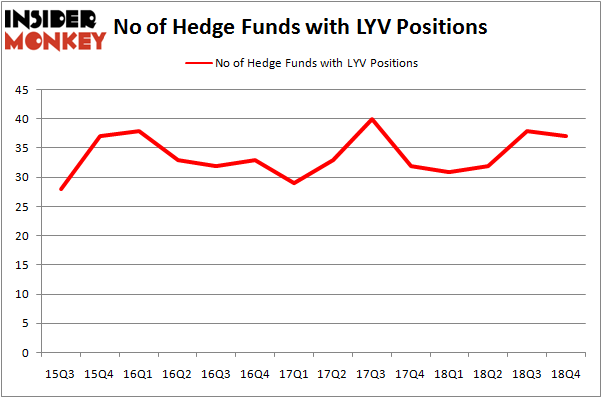 Due to the fact that Live Nation Entertainment, Inc. (NYSE:LYV) has witnessed declining sentiment from the smart money, logic holds that there is a sect of fund managers that decided to sell off their entire stakes by the end of the third quarter. It’s worth mentioning that David Fiszel’s Honeycomb Asset Management said goodbye to the largest stake of the “upper crust” of funds followed by Insider Monkey, valued at an estimated $40.9 million in stock. Amit Nitin Doshi’s fund, Harbor Spring Capital, also dropped its stock, about $26.3 million worth. These moves are interesting, as total hedge fund interest dropped by 1 funds by the end of the third quarter.

As you can see these stocks had an average of 28.75 hedge funds with bullish positions and the average amount invested in these stocks was $821 million. That figure was $862 million in LYV’s case. Eastman Chemical Company (NYSE:EMN) is the most popular stock in this table. On the other hand Hasbro, Inc. (NASDAQ:HAS) is the least popular one with only 19 bullish hedge fund positions. Compared to these stocks Live Nation Entertainment, Inc. (NYSE:LYV) is more popular among hedge funds. Our calculations showed that top 15 most popular stocks among hedge funds returned 19.7% through March 15th and outperformed the S&P 500 ETF (SPY) by 6.6 percentage points. Hedge funds were also right about betting on LYV as the stock returned 28.9% and outperformed the market as well.