A whopping number of 13F filings filed with U.S. Securities and Exchange Commission has been processed by Insider Monkey so that individual investors can look at the overall hedge fund sentiment towards the stocks included in their watchlists. These freshly-submitted public filings disclose money managers’ equity positions as of the end of the three-month period that ended December 31, so let’s proceed with the discussion of the hedge fund sentiment on Lithia Motors Inc (NYSE:LAD).

Lithia Motors Inc (NYSE:LAD) has experienced an increase in enthusiasm from smart money recently. Our calculations also showed that LAD isn’t among the 30 most popular stocks among hedge funds.

In today’s marketplace there are numerous indicators investors use to appraise their stock investments. Two of the most useful indicators are hedge fund and insider trading signals. Our researchers have shown that, historically, those who follow the best picks of the best investment managers can outclass their index-focused peers by a very impressive amount (see the details here).

What does the smart money think about Lithia Motors Inc (NYSE:LAD)? 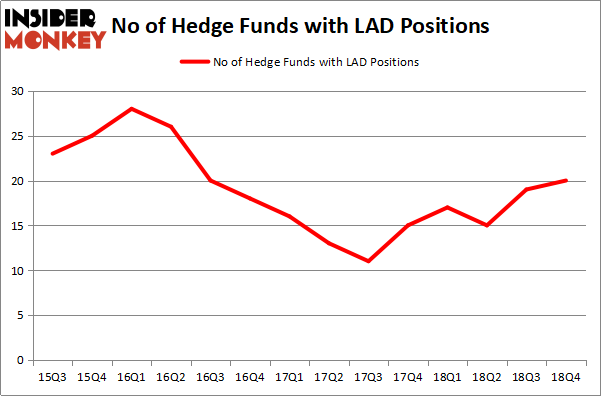 Now, some big names were breaking ground themselves. Park West Asset Management, managed by Peter S. Park, established the most outsized call position in Lithia Motors Inc (NYSE:LAD). Park West Asset Management had $19.1 million invested in the company at the end of the quarter. Alexander Mitchell’s Scopus Asset Management also made a $11.5 million investment in the stock during the quarter. The other funds with new positions in the stock are Sander Gerber’s Hudson Bay Capital Management, Richard Chilton’s Chilton Investment Company, and Paul Tudor Jones’s Tudor Investment Corp.

Let’s now review hedge fund activity in other stocks – not necessarily in the same industry as Lithia Motors Inc (NYSE:LAD) but similarly valued. We will take a look at Herman Miller, Inc. (NASDAQ:MLHR), Power Integrations Inc (NASDAQ:POWI), GreenSky, Inc. (NASDAQ:GSKY), and Deluxe Corporation (NYSE:DLX). All of these stocks’ market caps are similar to LAD’s market cap.

As you can see these stocks had an average of 17.5 hedge funds with bullish positions and the average amount invested in these stocks was $78 million. That figure was $470 million in LAD’s case. Deluxe Corporation (NYSE:DLX) is the most popular stock in this table. On the other hand Power Integrations Inc (NASDAQ:POWI) is the least popular one with only 4 bullish hedge fund positions. Lithia Motors Inc (NYSE:LAD) is not the most popular stock in this group but hedge fund interest is still above average. Our calculations showed that top 15 most popular stocks) among hedge funds returned 24.2% through April 22nd and outperformed the S&P 500 ETF (SPY) by more than 7 percentage points. Hedge funds were also right about betting on LAD as the stock returned 26.1% and outperformed the market by an even larger margin. Hedge funds were rewarded for their relative bullishness.