Were Hedge Funds Right About Flocking Into LendingTree, Inc (TREE) ?

LendingTree, Inc (NASDAQ:TREE) investors should be aware of an increase in activity from the world’s largest hedge funds lately. Our calculations also showed that TREE isn’t among the 30 most popular stocks among hedge funds.

What does the smart money think about LendingTree, Inc (NASDAQ:TREE)?

At the end of the fourth quarter, a total of 21 of the hedge funds tracked by Insider Monkey held long positions in this stock, a change of 17% from the previous quarter. Below, you can check out the change in hedge fund sentiment towards TREE over the last 14 quarters. So, let’s see which hedge funds were among the top holders of the stock and which hedge funds were making big moves. 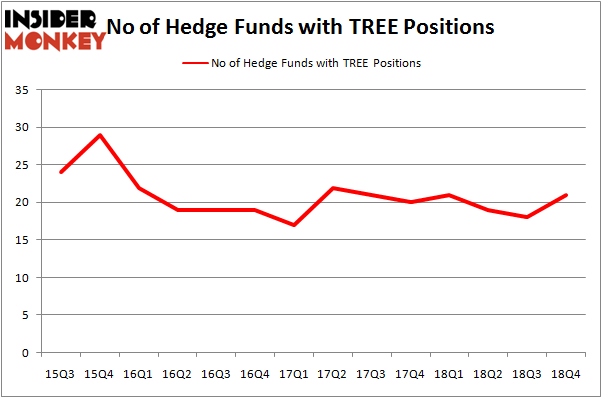 The largest stake in LendingTree, Inc (NASDAQ:TREE) was held by Citadel Investment Group, which reported holding $17.8 million worth of stock at the end of September. It was followed by PDT Partners with a $8.1 million position. Other investors bullish on the company included G2 Investment Partners Management, Ogborne Capital, and D E Shaw.

With a general bullishness amongst the heavyweights, some big names were leading the bulls’ herd. Citadel Investment Group, managed by Ken Griffin, initiated the most outsized position in LendingTree, Inc (NASDAQ:TREE). Citadel Investment Group had $17 million invested in the company at the end of the quarter. Mike Ogborne’s Ogborne Capital also initiated a $7.1 million position during the quarter. The following funds were also among the new TREE investors: D. E. Shaw’s D E Shaw, Jorge Paulo Lemann’s 3G Capital, and Brian C. Freckmann’s Lyon Street Capital.

As you can see these stocks had an average of 23.25 hedge funds with bullish positions and the average amount invested in these stocks was $281 million. That figure was $74 million in TREE’s case. Magnolia Oil & Gas Corporation (NYSE:MGY) is the most popular stock in this table. On the other hand Bank of Hawaii Corporation (NYSE:BOH) is the least popular one with only 13 bullish hedge fund positions. LendingTree, Inc (NASDAQ:TREE) is not the least popular stock in this group but hedge fund interest is still below average. Our calculations showed that top 15 most popular stocks) among hedge funds returned 24.2% through April 22nd and outperformed the S&P 500 ETF (SPY) by more than 7 percentage points. A small number of hedge funds were also right about betting on TREE as the stock returned 69.7% and outperformed the market by an even larger margin.