Were Hedge Funds Right About Flocking Into KLA-Tencor Corporation (KLAC) ?

Many investors, including Paul Tudor Jones or Stan Druckenmiller, have been saying before the Q4 market crash that the stock market is overvalued due to a low interest rate environment that leads to companies swapping their equity for debt and focusing mostly on short-term performance such as beating the quarterly earnings estimates. In the fourth quarter, many investors lost money due to unpredictable events such as the sudden increase in long-term interest rates and unintended consequences of the trade war with China. Nevertheless, many of the stocks that tanked in the fourth quarter still sport strong fundamentals and their decline was more related to the general market sentiment rather than their individual performance and hedge funds kept their bullish stance. In this article we will find out how hedge fund sentiment to KLA-Tencor Corporation (NASDAQ:KLAC) changed recently.

Is KLA-Tencor Corporation (NASDAQ:KLAC) an attractive investment right now? Money managers are becoming more confident. The number of long hedge fund bets moved up by 6 recently. Our calculations also showed that KLAC isn’t among the 30 most popular stocks among hedge funds.

In the eyes of most market participants, hedge funds are viewed as worthless, old investment tools of yesteryear. While there are more than 8000 funds trading at the moment, We hone in on the upper echelon of this club, approximately 750 funds. These hedge fund managers command the majority of the hedge fund industry’s total asset base, and by paying attention to their unrivaled investments, Insider Monkey has formulated a number of investment strategies that have historically defeated Mr. Market. Insider Monkey’s flagship hedge fund strategy outstripped the S&P 500 index by nearly 5 percentage points annually since its inception in May 2014 through early November 2018. We were able to generate large returns even by identifying short candidates. Our portfolio of short stocks lost 27.5% since February 2017 (through March 12th) even though the market was up nearly 25% during the same period. We just shared a list of 6 short targets in our latest quarterly update and they are already down an average of 6% in less than a month.

What does the smart money think about KLA-Tencor Corporation (NASDAQ:KLAC)?

Heading into the first quarter of 2019, a total of 33 of the hedge funds tracked by Insider Monkey were long this stock, a change of 22% from one quarter earlier. By comparison, 29 hedge funds held shares or bullish call options in KLAC a year ago. With hedge funds’ capital changing hands, there exists an “upper tier” of key hedge fund managers who were upping their stakes meaningfully (or already accumulated large positions). 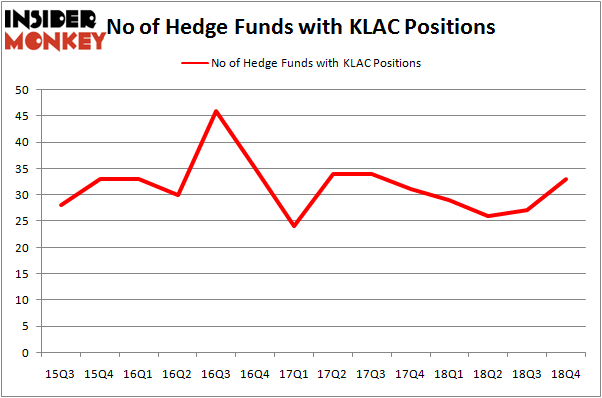 As aggregate interest increased, some big names were breaking ground themselves. Holocene Advisors, managed by Brandon Haley, assembled the biggest call position in KLA-Tencor Corporation (NASDAQ:KLAC). Holocene Advisors had $24.2 million invested in the company at the end of the quarter. Brandon Haley’s Holocene Advisors also made a $23.5 million investment in the stock during the quarter. The following funds were also among the new KLAC investors: David Steinberg and Eric Udoff’s Marlowe Partners, Ernest Chow and Jonathan Howe’s Sensato Capital Management, and Benjamin A. Smith’s Laurion Capital Management.

As you can see these stocks had an average of 26.75 hedge funds with bullish positions and the average amount invested in these stocks was $877 million. That figure was $798 million in KLAC’s case. CBRE Group, Inc. (NYSE:CBRE) is the most popular stock in this table. On the other hand L-3 Technologies, Inc. (NYSE:LLL) is the least popular one with only 22 bullish hedge fund positions. KLA-Tencor Corporation (NASDAQ:KLAC) is not the most popular stock in this group but hedge fund interest is still above average. This is a slightly positive signal but we’d rather spend our time researching stocks that hedge funds are piling on. Our calculations showed that top 15 most popular stocks among hedge funds returned 19.7% through March 15th and outperformed the S&P 500 ETF (SPY) by 6.6 percentage points. Hedge funds were also right about betting on KLAC as the stock returned 34.6% and outperformed the market as well.

Here’s What Hedge Funds Think About ABIOMED, Inc. (ABMD)
Monthly Newsletter Strategy
Download a free copy of our newsletter and see the details inside!
Hedge Fund Resource Center
Related News
KLA-Tencor Corporation (KLAC)Hedge Funds Are Snapping Up Electro Scientific Industries, Under Armour, Chegg and More: Why These Stocks Are Surging Should You Add KLA-Tencor Corp (KLAC) to Your Portfolio? Massive Cluster of Insider Selling at Semiconductor-Equipment Maker After Call-Off of Buyout Deal, Plus Insider Trading at AT&T, Delta, More Why KLA-Tencor, Lam Research, JD.Com And More Are Trending JPMorgan’s Top Dividend Stocks for 2016, Part 4 Here Is What Hedge Funds Think About KLA-Tencor Corporation (KLAC) Hedge Funds Have Never Been This Bullish On Visa Inc (V) Ten of the Most Common Addictions 13 African Countries with the Largest White Population in 2018
Billionaire Hedge Funds