Were Hedge Funds Right About Flocking Into InVitae Corporation (NVTA) ?

Is InVitae Corporation (NYSE:NVTA) a buy, sell, or hold? Hedge funds are taking an optimistic view. The number of long hedge fund bets went up by 4 in recent months. Our calculations also showed that nvta isn’t among the 30 most popular stocks among hedge funds. NVTA was in 28 hedge funds’ portfolios at the end of March. There were 24 hedge funds in our database with NVTA positions at the end of the previous quarter.

At Q1’s end, a total of 28 of the hedge funds tracked by Insider Monkey were long this stock, a change of 17% from one quarter earlier. Below, you can check out the change in hedge fund sentiment towards NVTA over the last 15 quarters. With hedgies’ sentiment swirling, there exists a few noteworthy hedge fund managers who were boosting their holdings substantially (or already accumulated large positions). 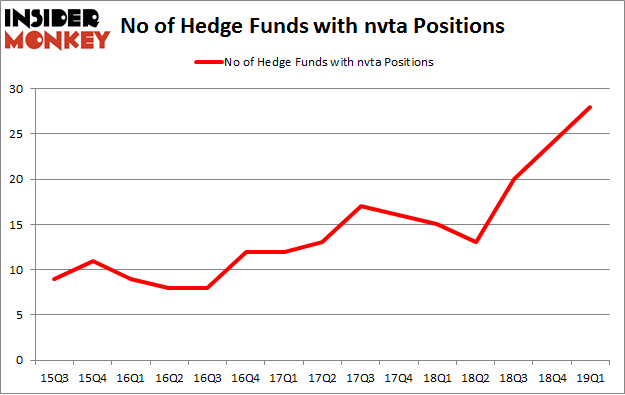 More specifically, Baker Bros. Advisors was the largest shareholder of InVitae Corporation (NYSE:NVTA), with a stake worth $91.4 million reported as of the end of March. Trailing Baker Bros. Advisors was Casdin Capital, which amassed a stake valued at $51.5 million. Perceptive Advisors, Redmile Group, and Rock Springs Capital Management were also very fond of the stock, giving the stock large weights in their portfolios.

Consequently, some big names have jumped into InVitae Corporation (NYSE:NVTA) headfirst. Opaleye Management, managed by James A. Silverman, established the largest position in InVitae Corporation (NYSE:NVTA). Opaleye Management had $10.3 million invested in the company at the end of the quarter. Thomas Steyer’s Farallon Capital also made a $7 million investment in the stock during the quarter. The other funds with brand new NVTA positions are Brad Farber’s Atika Capital, Mike Ogborne’s Ogborne Capital, and Richard Driehaus’s Driehaus Capital.

Let’s now take a look at hedge fund activity in other stocks – not necessarily in the same industry as InVitae Corporation (NYSE:NVTA) but similarly valued. We will take a look at Great Western Bancorp Inc (NYSE:GWB), Tri Pointe Group Inc (NYSE:TPH), Diodes Incorporated (NASDAQ:DIOD), and PriceSmart, Inc. (NASDAQ:PSMT). This group of stocks’ market values are similar to NVTA’s market value.