Were Hedge Funds Right About Piling Into Ingersoll-Rand Plc (IR)?

Ingersoll-Rand Plc (NYSE:IR) was in 43 hedge funds’ portfolios at the end of the fourth quarter of 2018. IR investors should be aware of an increase in enthusiasm from smart money recently. There were 42 hedge funds in our database with IR positions at the end of the previous quarter. Our calculations also showed that IR isn’t among the 30 most popular stocks among hedge funds. 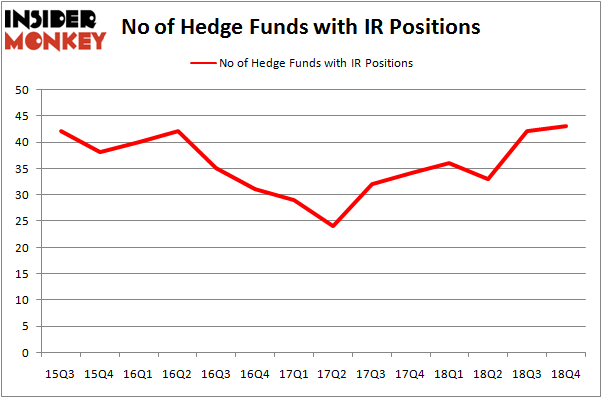 Among these funds, Generation Investment Management held the most valuable stake in Ingersoll-Rand Plc (NYSE:IR), which was worth $313.3 million at the end of the third quarter. On the second spot was Citadel Investment Group which amassed $154 million worth of shares. Moreover, Two Sigma Advisors, Millennium Management, and Alyeska Investment Group were also bullish on Ingersoll-Rand Plc (NYSE:IR), allocating a large percentage of their portfolios to this stock.

Now, key hedge funds have been driving this bullishness. Gotham Asset Management, managed by Joel Greenblatt, initiated the biggest position in Ingersoll-Rand Plc (NYSE:IR). Gotham Asset Management had $26.1 million invested in the company at the end of the quarter. Bain Capital’s Brookside Capital also initiated a $3.3 million position during the quarter. The other funds with new positions in the stock are Ben Levine, Andrew Manuel and Stefan Renold’s LMR Partners, Hoon Kim’s Quantinno Capital, and Minhua Zhang’s Weld Capital Management.

As you can see these stocks had an average of 31.25 hedge funds with bullish positions and the average amount invested in these stocks was $698 million. That figure was $1478 million in IR’s case. Anadarko Petroleum Corporation (NYSE:APC) is the most popular stock in this table. On the other hand T. Rowe Price Group, Inc. (NASDAQ:TROW) is the least popular one with only 22 bullish hedge fund positions. Ingersoll-Rand Plc (NYSE:IR) is not the most popular stock in this group but hedge fund interest is still above average and sits at its all time high. Our calculations showed that top 15 most popular stocks among hedge funds returned 19.7% through March 15th and outperformed the S&P 500 ETF (SPY) by 6.6 percentage points. Hedge funds were also right about betting on IR, though not to the same extent, as the stock returned 16.9% and outperformed the market as well.