Hedge Funds and other institutional investors have just completed filing their 13Fs with the Securities and Exchange Commission, revealing their equity portfolios as of the end of December. At Insider Monkey, we follow nearly 750 active hedge funds and notable investors and by analyzing their 13F filings, we can determine the stocks that they are collectively bullish on. One of their picks is Herc Holdings Inc. (NYSE:HRI), so let’s take a closer look at the sentiment that surrounds it in the current quarter.

Herc Holdings Inc. (NYSE:HRI) was in 27 hedge funds’ portfolios at the end of the fourth quarter of 2018. HRI investors should pay attention to an increase in enthusiasm from smart money lately. There were 24 hedge funds in our database with HRI holdings at the end of the previous quarter. Our calculations also showed that HRI isn’t among the 30 most popular stocks among hedge funds.

Heading into the first quarter of 2019, a total of 27 of the hedge funds tracked by Insider Monkey were bullish on this stock, a change of 13% from the previous quarter. The graph below displays the number of hedge funds with bullish position in HRI over the last 14 quarters. With hedgies’ sentiment swirling, there exists a few notable hedge fund managers who were boosting their stakes substantially (or already accumulated large positions). 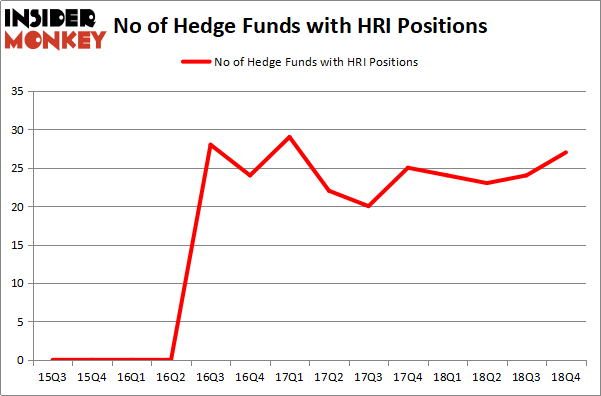 More specifically, Icahn Capital LP was the largest shareholder of Herc Holdings Inc. (NYSE:HRI), with a stake worth $116.8 million reported as of the end of December. Trailing Icahn Capital LP was GAMCO Investors, which amassed a stake valued at $101.2 million. Royce & Associates, Citadel Investment Group, and Governors Lane were also very fond of the stock, giving the stock large weights in their portfolios.

As one would reasonably expect, specific money managers have jumped into Herc Holdings Inc. (NYSE:HRI) headfirst. Nut Tree Capital, managed by Jared Nussbaum, established the most valuable position in Herc Holdings Inc. (NYSE:HRI). Nut Tree Capital had $8.6 million invested in the company at the end of the quarter. Paul Marshall and Ian Wace’s Marshall Wace LLP also made a $8.4 million investment in the stock during the quarter. The other funds with new positions in the stock are Jim Simons’s Renaissance Technologies, Ahmet Okumus’s Okumus Fund Management, and David Keidan’s Buckingham Capital Management.

As you can see these stocks had an average of 12 hedge funds with bullish positions and the average amount invested in these stocks was $59 million. That figure was $323 million in HRI’s case. Acorda Therapeutics Inc (NASDAQ:ACOR) is the most popular stock in this table. On the other hand National Energy Services Reunited Corp. (NASDAQ:NESR) is the least popular one with only 4 bullish hedge fund positions. Compared to these stocks Herc Holdings Inc. (NYSE:HRI) is more popular among hedge funds. Our calculations showed that top 15 most popular stocks) among hedge funds returned 24.2% through April 22nd and outperformed the S&P 500 ETF (SPY) by more than 7 percentage points. Hedge funds were also right about betting on HRI as the stock returned 79.4% and outperformed the market by an even larger margin. Hedge funds were clearly right about piling into this stock relative to other stocks with similar market capitalizations.