Hedge fund managers like David Einhorn, Bill Ackman, or Carl Icahn became billionaires through reaping large profits for their investors, which is why piggybacking their stock picks may provide us with significant returns as well. Many hedge funds, like Paul Singer’s Elliott Management, are pretty secretive, but we can still get some insights by analyzing their quarterly 13F filings. One of the most fertile grounds for large abnormal returns is hedge funds’ most popular small-cap picks, which are not so widely followed and often trade at a discount to their intrinsic value. In this article we will check out hedge fund activity in another small-cap stock: HEICO Corporation (NYSE:HEI).

Is HEICO Corporation (NYSE:HEI) undervalued? Investors who are in the know are taking an optimistic view. The number of long hedge fund bets increased by 1 in recent months. Our calculations also showed that HEI isn’t among the 30 most popular stocks among hedge funds. HEI was in 31 hedge funds’ portfolios at the end of the fourth quarter of 2018. There were 30 hedge funds in our database with HEI holdings at the end of the previous quarter.

We’re going to take a look at the fresh hedge fund action regarding HEICO Corporation (NYSE:HEI).

What does the smart money think about HEICO Corporation (NYSE:HEI)?

Heading into the first quarter of 2019, a total of 31 of the hedge funds tracked by Insider Monkey held long positions in this stock, a change of 3% from one quarter earlier. On the other hand, there were a total of 18 hedge funds with a bullish position in HEI a year ago. With the smart money’s capital changing hands, there exists a few notable hedge fund managers who were adding to their stakes considerably (or already accumulated large positions). 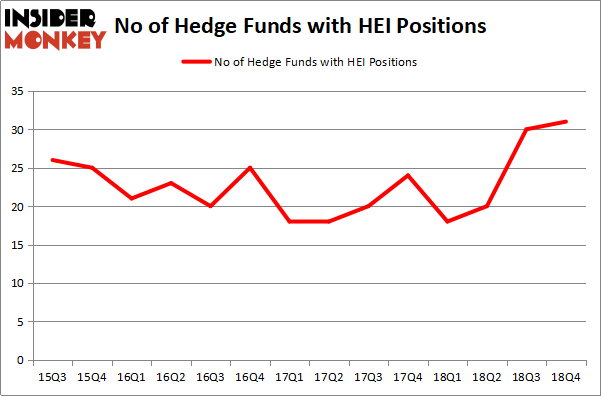 According to Insider Monkey’s hedge fund database, Ken Fisher’s Fisher Asset Management has the biggest position in HEICO Corporation (NYSE:HEI), worth close to $123.7 million, corresponding to 0.2% of its total 13F portfolio. The second largest stake is held by Renaissance Technologies, managed by Jim Simons, which holds a $115.6 million position; 0.1% of its 13F portfolio is allocated to the company. Some other members of the smart money that hold long positions encompass Robert Joseph Caruso’s Select Equity Group, Chuck Royce’s Royce & Associates and Richard Chilton’s Chilton Investment Company.

With a general bullishness amongst the heavyweights, some big names have jumped into HEICO Corporation (NYSE:HEI) headfirst. D E Shaw, managed by D. E. Shaw, created the largest position in HEICO Corporation (NYSE:HEI). D E Shaw had $3.8 million invested in the company at the end of the quarter. Peter Rathjens, Bruce Clarke and John Campbell’s Arrowstreet Capital also initiated a $1.7 million position during the quarter. The other funds with new positions in the stock are Brandon Haley’s Holocene Advisors, Dmitry Balyasny’s Balyasny Asset Management, and Andrew Feldstein and Stephen Siderow’s Blue Mountain Capital.

As you can see these stocks had an average of 29.5 hedge funds with bullish positions and the average amount invested in these stocks was $445 million. That figure was $732 million in HEI’s case. Tractor Supply Company (NASDAQ:TSCO) is the most popular stock in this table. On the other hand Hasbro, Inc. (NASDAQ:HAS) is the least popular one with only 19 bullish hedge fund positions. HEICO Corporation (NYSE:HEI) is not the most popular stock in this group but hedge fund interest is still above average. This is a slightly positive signal but we’d rather spend our time researching stocks that hedge funds are piling on. Our calculations showed that top 15 most popular stocks among hedge funds returned 21.3% through April 8th and outperformed the S&P 500 ETF (SPY) by more than 5 percentage points. Hedge funds were also right about betting on HEI as the stock returned 27.2% and outperformed the market as well. You can see the entire list of these shrewd hedge funds here.