Is EPAM Systems Inc (NYSE:EPAM) a bargain? Money managers are taking an optimistic view. The number of bullish hedge fund bets improved by 1 in recent months. Our calculations also showed that EPAM isn’t among the 30 most popular stocks among hedge funds.

According to most stock holders, hedge funds are seen as unimportant, outdated investment tools of the past. While there are more than 8000 funds with their doors open at present, Our experts choose to focus on the aristocrats of this club, approximately 750 funds. Most estimates calculate that this group of people direct bulk of all hedge funds’ total capital, and by following their unrivaled investments, Insider Monkey has spotted a few investment strategies that have historically outpaced the market. Insider Monkey’s flagship hedge fund strategy outpaced the S&P 500 index by nearly 5 percentage points a year since its inception in May 2014 through early November 2018. We were able to generate large returns even by identifying short candidates. Our portfolio of short stocks lost 27.5% since February 2017 (through March 12th) even though the market was up nearly 25% during the same period. We just shared a list of 6 short targets in our latest quarterly update and they are already down an average of 6% in less than a month. 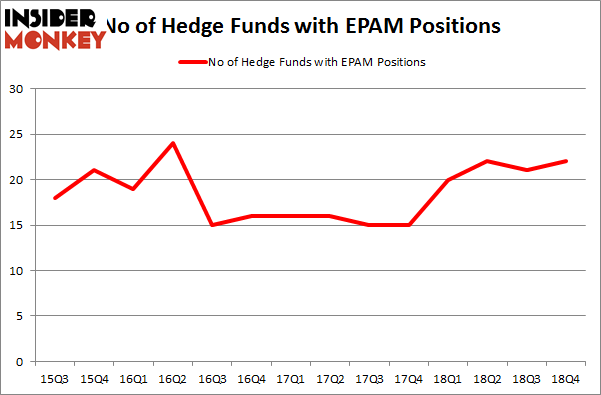 As one would reasonably expect, key money managers have been driving this bullishness. Venator Capital Management, managed by Brandon Osten, established the most valuable position in EPAM Systems Inc (NYSE:EPAM). Venator Capital Management had $4 million invested in the company at the end of the quarter. Hugh Sloane’s Sloane Robinson Investment Management also initiated a $2.8 million position during the quarter. The other funds with brand new EPAM positions are Andrew Feldstein and Stephen Siderow’s Blue Mountain Capital, John Overdeck and David Siegel’s Two Sigma Advisors, and Hoon Kim’s Quantinno Capital.

As you can see these stocks had an average of 26.5 hedge funds with bullish positions and the average amount invested in these stocks was $757 million. That figure was $81 million in EPAM’s case. Zendesk Inc (NYSE:ZEN) is the most popular stock in this table. On the other hand LATAM Airlines Group S.A. (NYSE:LTM) is the least popular one with only 8 bullish hedge fund positions. EPAM Systems Inc (NYSE:EPAM) is not the least popular stock in this group but hedge fund interest is still below average. This is a slightly negative signal and we’d rather spend our time researching stocks that hedge funds are piling on. Our calculations showed that top 15 most popular stocks among hedge funds returned 21.3% through April 8th and outperformed the S&P 500 ETF (SPY) by more than 5 percentage points. Hedge funds were also right about betting on EPAM as the stock returned 45.9% and outperformed the market as well.