Columbia Sportswear Company (NASDAQ:COLM) was in 24 hedge funds’ portfolios at the end of the fourth quarter of 2018. COLM investors should pay attention to an increase in activity from the world’s largest hedge funds recently. There were 23 hedge funds in our database with COLM positions at the end of the previous quarter. Our calculations also showed that COLM isn’t among the 30 most popular stocks among hedge funds.

To the average investor there are plenty of formulas stock market investors have at their disposal to value publicly traded companies. Two of the most underrated formulas are hedge fund and insider trading moves. We have shown that, historically, those who follow the best picks of the top investment managers can outclass the market by a superb amount (see the details here).

What have hedge funds been doing with Columbia Sportswear Company (NASDAQ:COLM)?

Heading into the first quarter of 2019, a total of 24 of the hedge funds tracked by Insider Monkey were long this stock, a change of 4% from one quarter earlier. The graph below displays the number of hedge funds with bullish position in COLM over the last 14 quarters. With hedgies’ positions undergoing their usual ebb and flow, there exists a few key hedge fund managers who were upping their stakes significantly (or already accumulated large positions). 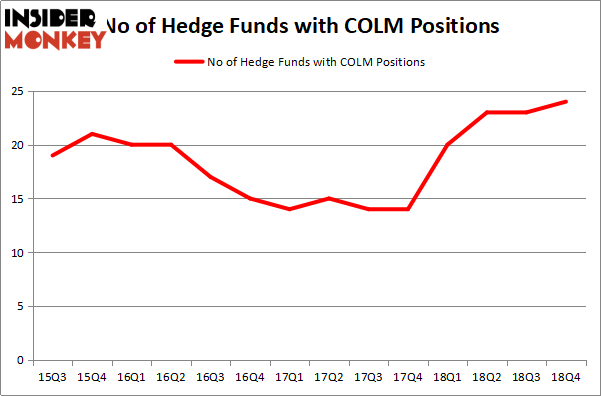 Among these funds, Two Sigma Advisors held the most valuable stake in Columbia Sportswear Company (NASDAQ:COLM), which was worth $27.7 million at the end of the third quarter. On the second spot was AQR Capital Management which amassed $26.8 million worth of shares. Moreover, Arrowstreet Capital, Royce & Associates, and Renaissance Technologies were also bullish on Columbia Sportswear Company (NASDAQ:COLM), allocating a large percentage of their portfolios to this stock.

With a general bullishness amongst the heavyweights, key money managers were leading the bulls’ herd. Broad Bay Capital, managed by Richard Scott Greeder, established the most outsized position in Columbia Sportswear Company (NASDAQ:COLM). Broad Bay Capital had $7.7 million invested in the company at the end of the quarter. Anthony Joseph Vaccarino’s North Fourth Asset Management also initiated a $6.1 million position during the quarter. The other funds with new positions in the stock are Doug Gordon, Jon Hilsabeck and Don Jabro’s Shellback Capital and Matthew Hulsizer’s PEAK6 Capital Management.

As you can see these stocks had an average of 21.75 hedge funds with bullish positions and the average amount invested in these stocks was $606 million. That figure was $232 million in COLM’s case. Etsy Inc (NASDAQ:ETSY) is the most popular stock in this table. On the other hand Douglas Emmett, Inc. (NYSE:DEI) is the least popular one with only 12 bullish hedge fund positions. Columbia Sportswear Company (NASDAQ:COLM) is not the most popular stock in this group but hedge fund interest is still above average. This is a slightly positive signal but we’d rather spend our time researching stocks that hedge funds are piling on. Our calculations showed that top 15 most popular stocks among hedge funds returned 21.3% through April 8th and outperformed the S&P 500 ETF (SPY) by more than 5 percentage points. Hedge funds were also right about betting on COLM as the stock returned 23% and outperformed the market as well.