At Q4’s end, a total of 13 of the hedge funds tracked by Insider Monkey were long this stock, a change of 18% from the second quarter of 2018. By comparison, 7 hedge funds held shares or bullish call options in CIGI a year ago. With hedge funds’ capital changing hands, there exists a select group of noteworthy hedge fund managers who were adding to their holdings considerably (or already accumulated large positions). 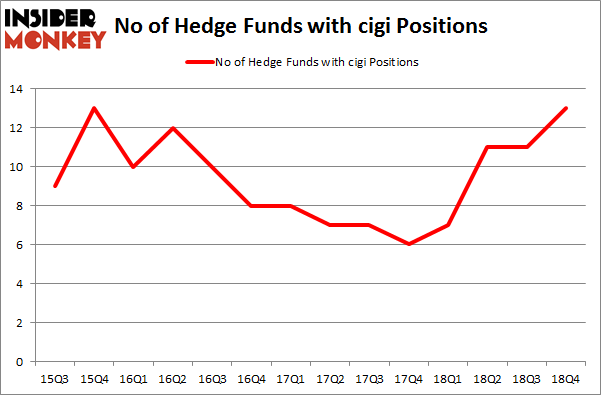 More specifically, Spruce House Investment Management was the largest shareholder of Colliers International Group Inc (NASDAQ:CIGI), with a stake worth $330.4 million reported as of the end of September. Trailing Spruce House Investment Management was BloombergSen, which amassed a stake valued at $121 million. Renaissance Technologies, Waratah Capital Advisors, and D E Shaw were also very fond of the stock, giving the stock large weights in their portfolios.

As one would reasonably expect, some big names have been driving this bullishness. Millennium Management, managed by Israel Englander, created the most valuable position in Colliers International Group Inc (NASDAQ:CIGI). Millennium Management had $1.8 million invested in the company at the end of the quarter. Peter Rathjens, Bruce Clarke and John Campbell’s Arrowstreet Capital also made a $1.1 million investment in the stock during the quarter. The following funds were also among the new CIGI investors: Paul Marshall and Ian Wace’s Marshall Wace LLP and Paul Tudor Jones’s Tudor Investment Corp.

As you can see these stocks had an average of 11.75 hedge funds with bullish positions and the average amount invested in these stocks was $60 million. That figure was $540 million in CIGI’s case. Antero Midstream Corporation (NYSE:AMGP) is the most popular stock in this table. On the other hand Terreno Realty Corporation (NYSE:TRNO) is the least popular one with only 10 bullish hedge fund positions. Colliers International Group Inc (NASDAQ:CIGI) is not the most popular stock in this group but hedge fund interest is still above average. Our calculations showed that top 15 most popular stocks) among hedge funds returned 24.2% through April 22nd and outperformed the S&P 500 ETF (SPY) by more than 7 percentage points. Hedge funds were also right about betting on CIGI as the stock returned 25.2% and outperformed the market by an even larger margin. Hedge funds were rewarded for their relative bullishness.