Is Cogent Communications Holdings, Inc. (NASDAQ:CCOI) going to take off soon? Prominent investors are betting on the stock. The number of bullish hedge fund positions advanced by 5 recently. Our calculations also showed that ccoi isn’t among the 30 most popular stocks among hedge funds. CCOI was in 17 hedge funds’ portfolios at the end of December. There were 12 hedge funds in our database with CCOI positions at the end of the previous quarter.

What does the smart money think about Cogent Communications Holdings, Inc. (NASDAQ:CCOI)? 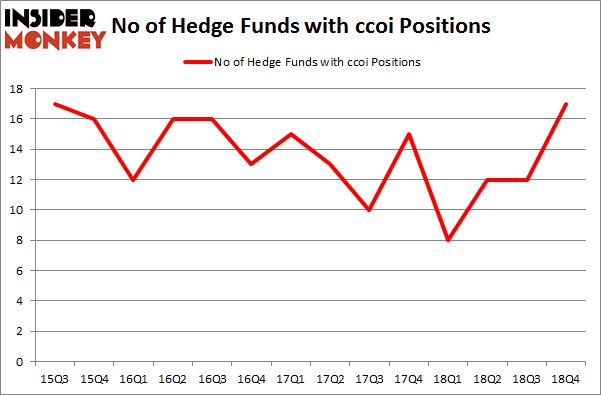 Of the funds tracked by Insider Monkey, Renaissance Technologies, managed by Jim Simons, holds the largest position in Cogent Communications Holdings, Inc. (NASDAQ:CCOI). Renaissance Technologies has a $154.3 million position in the stock, comprising 0.2% of its 13F portfolio. Sitting at the No. 2 spot is GLG Partners, led by Noam Gottesman, holding a $21.8 million position; the fund has 0.1% of its 13F portfolio invested in the stock. Some other professional money managers with similar optimism include David Harding’s Winton Capital Management, Charles Paquelet’s Skylands Capital and Genevieve Kahr’s Ailanthus Capital Management.

With a general bullishness amongst the heavyweights, some big names were leading the bulls’ herd. Ailanthus Capital Management, managed by Genevieve Kahr, established the biggest position in Cogent Communications Holdings, Inc. (NASDAQ:CCOI). Ailanthus Capital Management had $4.5 million invested in the company at the end of the quarter. Israel Englander’s Millennium Management also initiated a $3.9 million position during the quarter. The other funds with new positions in the stock are Ken Griffin’s Citadel Investment Group, Paul Marshall and Ian Wace’s Marshall Wace LLP, and Paul Tudor Jones’s Tudor Investment Corp.

As you can see these stocks had an average of 19 hedge funds with bullish positions and the average amount invested in these stocks was $149 million. That figure was $219 million in CCOI’s case. Vonage Holdings Corp. (NYSE:VG) is the most popular stock in this table. On the other hand Apergy Corporation (NYSE:APY) is the least popular one with only 13 bullish hedge fund positions. Cogent Communications Holdings, Inc. (NASDAQ:CCOI) is not the least popular stock in this group but hedge fund interest is still below average. Our calculations showed that top 15 most popular stocks) among hedge funds returned 24.2% through April 22nd and outperformed the S&P 500 ETF (SPY) by more than 7 percentage points. A small number of hedge funds were also right about betting on CCOI as the stock returned 26.6% and outperformed the market by an even larger margin.