Centrais Elétricas Brasileiras S.A. – Eletrobras (NYSE:EBR) investors should pay attention to an increase in hedge fund interest of late. EBR was in 5 hedge funds’ portfolios at the end of December. There were 4 hedge funds in our database with EBR positions at the end of the previous quarter. Our calculations also showed that EBR isn’t among the 30 most popular stocks among hedge funds.

What have hedge funds been doing with Centrais Elétricas Brasileiras S.A. – Eletrobras (NYSE:EBR)?

At Q4’s end, a total of 5 of the hedge funds tracked by Insider Monkey were bullish on this stock, a change of 25% from the previous quarter. On the other hand, there were a total of 4 hedge funds with a bullish position in EBR a year ago. With hedgies’ sentiment swirling, there exists an “upper tier” of noteworthy hedge fund managers who were increasing their holdings substantially (or already accumulated large positions). 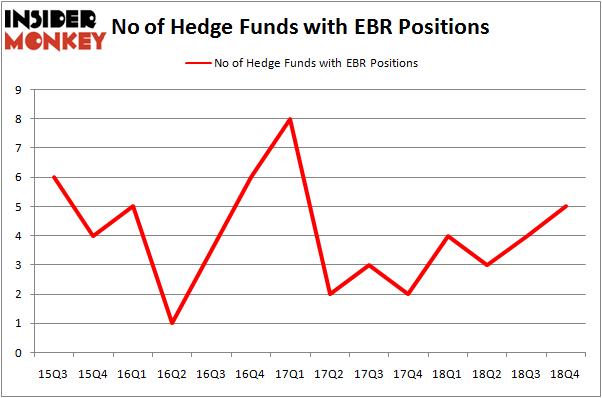 Of the funds tracked by Insider Monkey, Arrowstreet Capital, managed by Peter Rathjens, Bruce Clarke and John Campbell, holds the most valuable position in Centrais Elétricas Brasileiras S.A. – Eletrobras (NYSE:EBR). Arrowstreet Capital has a $7.6 million position in the stock, comprising less than 0.1%% of its 13F portfolio. The second largest stake is held by Millennium Management, led by Israel Englander, holding a $1.6 million position; the fund has less than 0.1%% of its 13F portfolio invested in the stock. Some other peers that hold long positions comprise David Iben’s Kopernik Global Investors, Ken Griffin’s Citadel Investment Group and Matthew Tewksbury’s Stevens Capital Management.

Now, some big names have been driving this bullishness. Citadel Investment Group, managed by Ken Griffin, established the largest position in Centrais Elétricas Brasileiras S.A. – Eletrobras (NYSE:EBR). Citadel Investment Group had $0.1 million invested in the company at the end of the quarter. Matthew Tewksbury’s Stevens Capital Management also made a $0.1 million investment in the stock during the quarter.

As you can see these stocks had an average of 29 hedge funds with bullish positions and the average amount invested in these stocks was $1062 million. That figure was $10 million in EBR’s case. DaVita Inc (NYSE:DVA) is the most popular stock in this table. On the other hand Westlake Chemical Corporation (NYSE:WLK) is the least popular one with only 24 bullish hedge fund positions. Compared to these stocks Centrais Elétricas Brasileiras S.A. – Eletrobras (NYSE:EBR) is even less popular than WLK. Considering that hedge funds aren’t fond of this stock in relation to other companies analyzed in this article, it may be a good idea to analyze it in detail and understand why the smart money isn’t behind this stock. This isn’t necessarily bad news. Although it is possible that hedge funds may think the stock is overpriced and view the stock as a short candidate, they may not be very familiar with the bullish thesis. Our calculations showed that top 15 most popular stocks among hedge funds returned 21.3% through April 8th and outperformed the S&P 500 ETF (SPY) by more than 5 percentage points. Hedge funds were also right about betting on EBR as the stock returned 42.4% and outperformed the market as well. You can see the entire list of these shrewd hedge funds here.