Before we spend countless hours researching a company, we like to analyze what insiders, hedge funds and billionaire investors think of the stock first. This is a necessary first step in our investment process because our research has shown that the elite investors’ consensus returns have been exceptional. In the following paragraphs, we find out what the billionaire investors and hedge funds think of BRF Brasil Foods SA (NYSE:BRFS).

BRF Brasil Foods SA (NYSE:BRFS) was in 13 hedge funds’ portfolios at the end of June. BRFS has seen an increase in enthusiasm from smart money of late. There were 10 hedge funds in our database with BRFS positions at the end of the previous quarter. Our calculations also showed that BRFS isn’t among the 30 most popular stocks among hedge funds (view the video below).

Unlike some fund managers who are betting on Dow reaching 40000 in a year, our long-short investment strategy doesn’t rely on bull markets to deliver double digit returns. We only rely on hedge fund buy/sell signals. We’re going to take a gander at the key hedge fund action regarding BRF Brasil Foods SA (NYSE:BRFS).

What have hedge funds been doing with BRF Brasil Foods SA (NYSE:BRFS)? 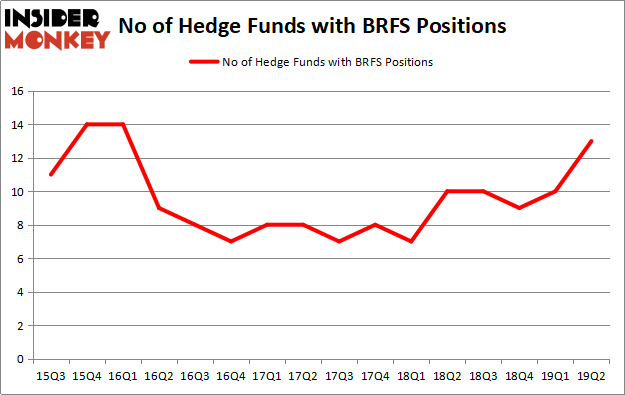 The largest stake in BRF Brasil Foods SA (NYSE:BRFS) was held by Oaktree Capital Management, which reported holding $42.5 million worth of stock at the end of March. It was followed by Coatue Management with a $20.1 million position. Other investors bullish on the company included Millennium Management, Platinum Asset Management, and QVT Financial.

As you can see these stocks had an average of 26.25 hedge funds with bullish positions and the average amount invested in these stocks was $711 million. That figure was $124 million in BRFS’s case. Charles River Laboratories International Inc. (NYSE:CRL) is the most popular stock in this table. On the other hand Hexcel Corporation (NYSE:HXL) is the least popular one with only 23 bullish hedge fund positions. Compared to these stocks BRF Brasil Foods SA (NYSE:BRFS) is even less popular than HXL. Hedge funds clearly dropped the ball on BRFS as the stock delivered strong returns, though hedge funds’ consensus picks still generated respectable returns. Our calculations showed that top 20 most popular stocks among hedge funds returned 24.4% in 2019 through September 30th and outperformed the S&P 500 ETF (SPY) by 4 percentage points. A small number of hedge funds were also right about betting on BRFS as the stock returned 20.5% during the third quarter and outperformed the market by an even larger margin.

Were Hedge Funds Right About Tuning Out Best Buy Co., Inc. (BBY)?
Monthly Newsletter Strategy
Download a free copy of our newsletter and see the details inside!
Hedge Fund Resource Center
Related News
Did Hedge Funds Drop The Ball On BRF S.A. (BRFS) ? Is BRF S.A. (BRFS) A Good Stock To Buy According To Hedgies? Here is What Hedge Funds Think About BRF Brasil Foods SA (BRFS) Is BRF SA (ADR) (BRFS) a Good Stock to Buy? 13D Filing: Tarpon Investimentos S.a. and B R F Brasil Foods S A (BRFS) Apple Inc. (AAPL), The Boeing Company (BA)–Warning: No Portfolio Is Complete Without This Sector Should You Buy Tyson Foods, Inc. (TSN)? 11 Largest Auto Insurance Companies In The US In 2019 10 Poorest Cities in America in 2019 8 Lowest Tar and Nicotine Cigarette Brands in 2019
Billionaire Hedge Funds