Booz Allen Hamilton Holding Corporation (NYSE:BAH) was in 26 hedge funds’ portfolios at the end of the fourth quarter of 2018. BAH has experienced an increase in hedge fund sentiment recently. There were 22 hedge funds in our database with BAH holdings at the end of the previous quarter. Our calculations also showed that BAH isn’t among the 30 most popular stocks among hedge funds.

What have hedge funds been doing with Booz Allen Hamilton Holding Corporation (NYSE:BAH)?

Heading into the first quarter of 2019, a total of 26 of the hedge funds tracked by Insider Monkey held long positions in this stock, a change of 18% from the second quarter of 2018. On the other hand, there were a total of 16 hedge funds with a bullish position in BAH a year ago. With hedgies’ sentiment swirling, there exists a few key hedge fund managers who were adding to their stakes significantly (or already accumulated large positions). 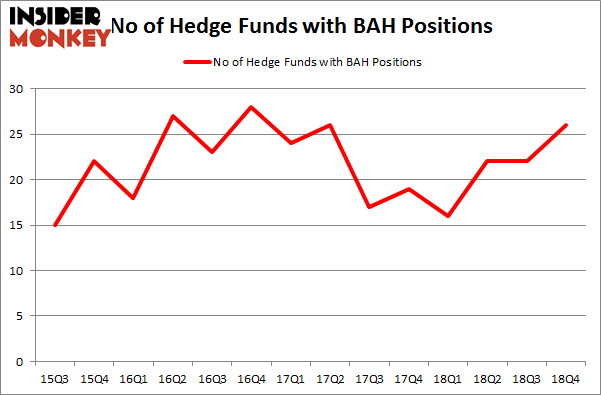 According to publicly available hedge fund and institutional investor holdings data compiled by Insider Monkey, Polar Capital, managed by Brian Ashford-Russell and Tim Woolley, holds the most valuable position in Booz Allen Hamilton Holding Corporation (NYSE:BAH). Polar Capital has a $72.5 million position in the stock, comprising 0.8% of its 13F portfolio. The second most bullish fund manager is AQR Capital Management, led by Cliff Asness, holding a $52.5 million position; the fund has 0.1% of its 13F portfolio invested in the stock. Other peers with similar optimism include Israel Englander’s Millennium Management, Joel Greenblatt’s Gotham Asset Management and John Overdeck and David Siegel’s Two Sigma Advisors.

As you can see these stocks had an average of 23 hedge funds with bullish positions and the average amount invested in these stocks was $655 million. That figure was $216 million in BAH’s case. The Madison Square Garden Company (NYSE:MSG) is the most popular stock in this table. On the other hand Gerdau SA (NYSE:GGB) is the least popular one with only 12 bullish hedge fund positions. Booz Allen Hamilton Holding Corporation (NYSE:BAH) is not the most popular stock in this group but hedge fund interest is still above average. This is a slightly positive signal but we’d rather spend our time researching stocks that hedge funds are piling on. Our calculations showed that top 15 most popular stocks among hedge funds returned 21.3% through April 8th and outperformed the S&P 500 ETF (SPY) by more than 5 percentage points. Hedge funds were also right about betting on BAH as the stock returned 30% and outperformed the market as well.