Were Hedge Funds Right About Flocking Into BB&T Corporation (BBT)?

The Insider Monkey team has completed processing the quarterly 13F filings for the December quarter submitted by the hedge funds and other money managers included in our extensive database. Most hedge fund investors endured a torrid quarter, which certainly propelled them to adjust their equity holdings so as to maintain the desired risk profile. As a result, the relevancy of these public filings and their content is indisputable, as they may reveal numerous high-potential stocks. The following article will discuss the smart money sentiment towards BB&T Corporation (NYSE:BBT).

Is BB&T Corporation (NYSE:BBT) a cheap investment right now? Prominent investors are in a bullish mood. The number of bullish hedge fund bets rose by 11 lately. Our calculations also showed that BBT isn’t among the 30 most popular stocks among hedge funds. BBT was in 31 hedge funds’ portfolios at the end of December. There were 20 hedge funds in our database with BBT holdings at the end of the previous quarter.

At Q4’s end, a total of 31 of the hedge funds tracked by Insider Monkey were long this stock, a change of 55% from one quarter earlier. The graph below displays the number of hedge funds with bullish position in BBT over the last 14 quarters. With hedgies’ positions undergoing their usual ebb and flow, there exists a few noteworthy hedge fund managers who were increasing their holdings considerably (or already accumulated large positions). 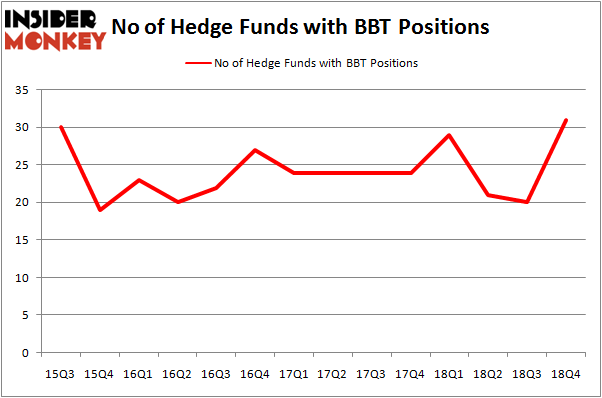 Among these funds, GLG Partners held the most valuable stake in BB&T Corporation (NYSE:BBT), which was worth $19.9 million at the end of the third quarter. On the second spot was Gillson Capital which amassed $19.7 million worth of shares. Moreover, Renaissance Technologies, Citadel Investment Group, and Azora Capital were also bullish on BB&T Corporation (NYSE:BBT), allocating a large percentage of their portfolios to this stock.

As one would reasonably expect, key money managers were leading the bulls’ herd. Renaissance Technologies, managed by Jim Simons, created the biggest position in BB&T Corporation (NYSE:BBT). Renaissance Technologies had $15.3 million invested in the company at the end of the quarter. Ravi Chopra’s Azora Capital also made a $14.1 million investment in the stock during the quarter. The other funds with new positions in the stock are Peter Rathjens, Bruce Clarke and John Campbell’s Arrowstreet Capital, Ira Unschuld’s Brant Point Investment Management, and David Costen Haley’s HBK Investments.

As you can see these stocks had an average of 16.5 hedge funds with bullish positions and the average amount invested in these stocks was $339 million. That figure was $132 million in BBT’s case. ICICI Bank Limited (NYSE:IBN) is the most popular stock in this table. On the other hand China Unicom (Hong Kong) Limited (NYSE:CHU) is the least popular one with only 9 bullish hedge fund positions. Compared to these stocks BB&T Corporation (NYSE:BBT) is more popular among hedge funds. Our calculations showed that top 15 most popular stocks among hedge funds returned 19.7% through March 15th and outperformed the S&P 500 ETF (SPY) by 6.6 percentage points. Hedge funds were also right about betting on BBT, though not to the same extent, as the stock returned 16.3% and outperformed the market as well.