The market has been volatile in the fourth quarter as the Federal Reserve continued its rate hikes to normalize the interest rates. Small cap stocks have been hit hard as a result, as the Russell 2000 ETF (IWM) has underperformed the larger S&P 500 ETF (SPY) by nearly 7 percentage points. SEC filings and hedge fund investor letters indicate that the smart money seems to be paring back their overall long exposure since summer months, and the funds’ movements is one of the reasons why the major indexes have retraced. In this article, we analyze what the smart money thinks of Bausch Health Companies (NYSE:BHC) and find out how it is affected by hedge funds’ moves.

Bausch Health Companies (NYSE:BHC) was in 32 hedge funds’ portfolios at the end of December. BHC investors should pay attention to an increase in activity from the world’s largest hedge funds in recent months. There were 30 hedge funds in our database with BHC positions at the end of the previous quarter. Our calculations also showed that BHC isn’t among the 30 most popular stocks among hedge funds. 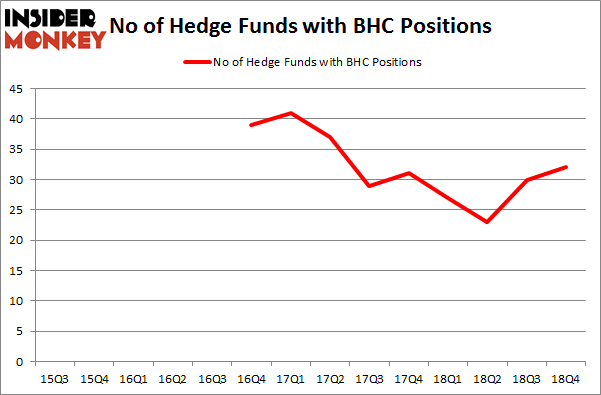 The largest stake in Bausch Health Companies (NYSE:BHC) was held by Paulson & Co, which reported holding $384.9 million worth of stock at the end of September. It was followed by ValueAct Capital with a $333.1 million position. Other investors bullish on the company included Glenview Capital, GoldenTree Asset Management, and OrbiMed Advisors.

With a general bullishness amongst the heavyweights, some big names were leading the bulls’ herd. AQR Capital Management, managed by Cliff Asness, initiated the most valuable position in Bausch Health Companies (NYSE:BHC). AQR Capital Management had $36.5 million invested in the company at the end of the quarter. Stephen DuBois’s Camber Capital Management also initiated a $18.5 million position during the quarter. The other funds with brand new BHC positions are Michael Gelband’s ExodusPoint Capital, Paul Marshall and Ian Wace’s Marshall Wace LLP, and Clint Carlson’s Carlson Capital.

As you can see these stocks had an average of 22.25 hedge funds with bullish positions and the average amount invested in these stocks was $445 million. That figure was $1348 million in BHC’s case. KAR Auction Services Inc (NYSE:KAR) is the most popular stock in this table. On the other hand AMERCO (NASDAQ:UHAL) is the least popular one with only 7 bullish hedge fund positions. Bausch Health Companies (NYSE:BHC) is not the most popular stock in this group but hedge fund interest is still above average. This is a slightly positive signal but we’d rather spend our time researching stocks that hedge funds are piling on. Our calculations showed that top 15 most popular stocks among hedge funds returned 21.3% through April 8th and outperformed the S&P 500 ETF (SPY) by more than 5 percentage points. Hedge funds were also right about betting on BHC as the stock returned 39.8% and outperformed the market as well.