Were Hedge Funds Right About Flocking Into BanColombia S.A. (CIB) ?

Insider Monkey finished processing more than 700 13F filings submitted by hedge funds and prominent investors. These filings show these funds’ portfolio positions as of December 31st, 2018. In this article we are going to take a look at smart money sentiment towards BanColombia S.A. (NYSE:CIB).

What have hedge funds been doing with BanColombia S.A. (NYSE:CIB)? 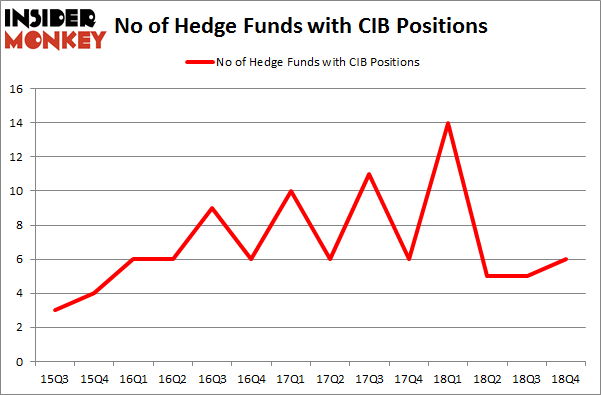 According to Insider Monkey’s hedge fund database, Polaris Capital Management, managed by Bernard Horn, holds the number one position in BanColombia S.A. (NYSE:CIB). Polaris Capital Management has a $73.9 million position in the stock, comprising 3.4% of its 13F portfolio. Coming in second is Jim Simons of Renaissance Technologies, with a $6.5 million position; the fund has less than 0.1%% of its 13F portfolio invested in the stock. Some other hedge funds and institutional investors with similar optimism encompass William B. Gray’s Orbis Investment Management, Thomas Bailard’s Bailard Inc and John Overdeck and David Siegel’s Two Sigma Advisors.

As you can see these stocks had an average of 23.75 hedge funds with bullish positions and the average amount invested in these stocks was $1220 million. That figure was $86 million in CIB’s case. Macy’s, Inc. (NYSE:M) is the most popular stock in this table. On the other hand Seattle Genetics, Inc. (NASDAQ:SGEN) is the least popular one with only 16 bullish hedge fund positions. Compared to these stocks BanColombia S.A. (NYSE:CIB) is even less popular than SGEN. Considering that hedge funds aren’t fond of this stock in relation to other companies analyzed in this article, it may be a good idea to analyze it in detail and understand why the smart money isn’t behind this stock. This isn’t necessarily bad news. Although it is possible that hedge funds may think the stock is overpriced and view the stock as a short candidate, they may not be very familiar with the bullish thesis. Our calculations showed that top 15 most popular stocks among hedge funds returned 19.7% through March 15th and outperformed the S&P 500 ETF (SPY) by 6.6 percentage points. Hedge funds were also right about betting on CIB as the stock returned 34.1% and outperformed the market as well. You can see the entire list of these shrewd hedge funds here.