Were Hedge Funds Right About Flocking Into AutoZone, Inc. (AZO) ?

The elite funds run by legendary investors such as David Tepper and Dan Loeb make hundreds of millions of dollars for themselves and their investors by spending enormous resources doing research on small cap stocks that big investment banks don’t follow. Because of their pay structures, they have strong incentives to do the research necessary to beat the market. That’s why we pay close attention to what they think in small cap stocks. In this article, we take a closer look at AutoZone, Inc. (NYSE:AZO) from the perspective of those elite funds.

AutoZone, Inc. (NYSE:AZO) was in 42 hedge funds’ portfolios at the end of the first quarter of 2019. AZO shareholders have witnessed an increase in enthusiasm from smart money recently. There were 40 hedge funds in our database with AZO positions at the end of the previous quarter. Our calculations also showed that azo isn’t among the 30 most popular stocks among hedge funds. 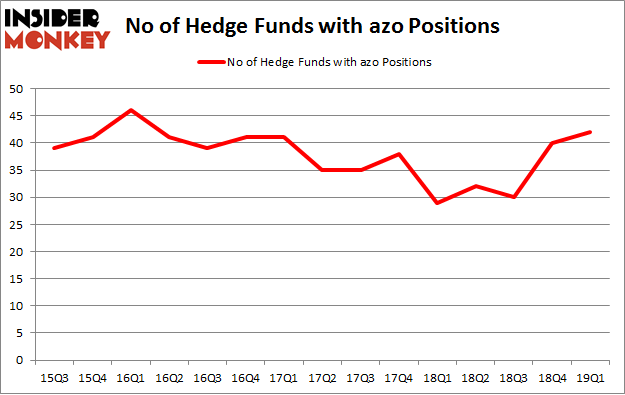 According to publicly available hedge fund and institutional investor holdings data compiled by Insider Monkey, Cliff Asness’s AQR Capital Management has the number one position in AutoZone, Inc. (NYSE:AZO), worth close to $207.7 million, corresponding to 0.2% of its total 13F portfolio. The second most bullish fund manager is John Overdeck and David Siegel of Two Sigma Advisors, with a $180.8 million position; 0.5% of its 13F portfolio is allocated to the company. Other members of the smart money that are bullish encompass Ken Griffin’s Citadel Investment Group, Peter Rathjens, Bruce Clarke and John Campbell’s Arrowstreet Capital and Brandon Haley’s Holocene Advisors.

As industrywide interest jumped, specific money managers have jumped into AutoZone, Inc. (NYSE:AZO) headfirst. Junto Capital Management, managed by James Parsons, initiated the biggest position in AutoZone, Inc. (NYSE:AZO). Junto Capital Management had $38.5 million invested in the company at the end of the quarter. Phill Gross and Robert Atchinson’s Adage Capital Management also made a $31.6 million investment in the stock during the quarter. The other funds with new positions in the stock are Bain Capital’s Brookside Capital, Anthony Joseph Vaccarino’s North Fourth Asset Management, and Louis Navellier’s Navellier & Associates.

As you can see these stocks had an average of 36.75 hedge funds with bullish positions and the average amount invested in these stocks was $1292 million. That figure was $1209 million in AZO’s case. Spotify Technology S.A. (NYSE:SPOT) is the most popular stock in this table. On the other hand CRH PLC (NYSE:CRH) is the least popular one with only 5 bullish hedge fund positions. AutoZone, Inc. (NYSE:AZO) is not the most popular stock in this group but hedge fund interest is still above average. Our calculations showed that top 20 most popular stocks among hedge funds returned 1.9% in Q2 through May 30th and outperformed the S&P 500 ETF (SPY) by more than 3 percentage points. Hedge funds were also right about betting on AZO as the stock returned 2.1% during the same period and outperformed the market by an even larger margin. Hedge funds were rewarded for their relative bullishness.