Were Hedge Funds Right About Flocking Into AppFolio Inc (APPF) ?

While the market driven by short-term sentiment influenced by uncertainty regarding the future of the interest rate environment in the US, declining oil prices and the trade war with China, many smart money investors kept their optimism regarding the current bull run in the fourth quarter, while still hedging many of their long positions. However, as we know, big investors usually buy stocks with strong fundamentals, which is why we believe we can profit from imitating them. In this article, we are going to take a look at the smart money sentiment surrounding AppFolio Inc (NASDAQ:APPF).

AppFolio Inc (NASDAQ:APPF) shareholders have witnessed a decrease in hedge fund sentiment of late. APPF was in 14 hedge funds’ portfolios at the end of December. There were 19 hedge funds in our database with APPF positions at the end of the previous quarter. Our calculations also showed that APPF isn’t among the 30 most popular stocks among hedge funds.

To the average investor there are many methods shareholders have at their disposal to value publicly traded companies. Two of the best methods are hedge fund and insider trading interest. Our researchers have shown that, historically, those who follow the top picks of the top money managers can beat the broader indices by a superb amount (see the details here).

At Q4’s end, a total of 14 of the hedge funds tracked by Insider Monkey were bullish on this stock, a change of -26% from one quarter earlier. By comparison, 21 hedge funds held shares or bullish call options in APPF a year ago. With the smart money’s sentiment swirling, there exists an “upper tier” of key hedge fund managers who were increasing their holdings significantly (or already accumulated large positions). 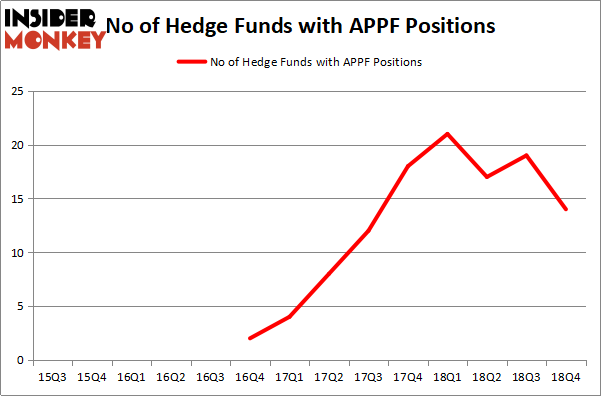 The largest stake in AppFolio Inc (NASDAQ:APPF) was held by Ashe Capital, which reported holding $94.8 million worth of stock at the end of September. It was followed by Renaissance Technologies with a $30.3 million position. Other investors bullish on the company included Cat Rock Capital, Echo Street Capital Management, and AQR Capital Management.

Since AppFolio Inc (NASDAQ:APPF) has experienced declining sentiment from the smart money, it’s easy to see that there is a sect of fund managers that elected to cut their entire stakes last quarter. At the top of the heap, John Osterweis’s Osterweis Capital Management dropped the biggest investment of the 700 funds monitored by Insider Monkey, worth an estimated $7 million in stock. David Costen Haley’s fund, HBK Investments, also dumped its stock, about $2.9 million worth. These transactions are interesting, as total hedge fund interest dropped by 5 funds last quarter.

As you can see these stocks had an average of 17.75 hedge funds with bullish positions and the average amount invested in these stocks was $410 million. That figure was $171 million in APPF’s case. Heron Therapeutics Inc (NASDAQ:HRTX) is the most popular stock in this table. On the other hand Glaukos Corporation (NYSE:GKOS) is the least popular one with only 11 bullish hedge fund positions. AppFolio Inc (NASDAQ:APPF) is not the least popular stock in this group but hedge fund interest is still below average. Our calculations showed that top 15 most popular stocks) among hedge funds returned 24.2% through April 22nd and outperformed the S&P 500 ETF (SPY) by more than 7 percentage points. A small number of hedge funds were also right about betting on APPF as the stock returned 56.8% and outperformed the market by an even larger margin.