A whopping number of 13F filings filed with U.S. Securities and Exchange Commission has been processed by Insider Monkey so that individual investors can look at the overall hedge fund sentiment towards the stocks included in their watchlists. These freshly-submitted public filings disclose money managers’ equity positions as of the end of the three-month period that ended December 31, so let’s proceed with the discussion of the hedge fund sentiment on AerCap Holdings N.V. (NYSE:AER).

AerCap Holdings N.V. (NYSE:AER) was in 31 hedge funds’ portfolios at the end of the fourth quarter of 2018. AER shareholders have witnessed an increase in hedge fund sentiment of late. There were 22 hedge funds in our database with AER positions at the end of the previous quarter. Our calculations also showed that AER isn’t among the 30 most popular stocks among hedge funds.

Heading into the first quarter of 2019, a total of 31 of the hedge funds tracked by Insider Monkey were bullish on this stock, a change of 41% from one quarter earlier. The graph below displays the number of hedge funds with bullish position in AER over the last 14 quarters. With hedge funds’ positions undergoing their usual ebb and flow, there exists an “upper tier” of noteworthy hedge fund managers who were increasing their holdings substantially (or already accumulated large positions). 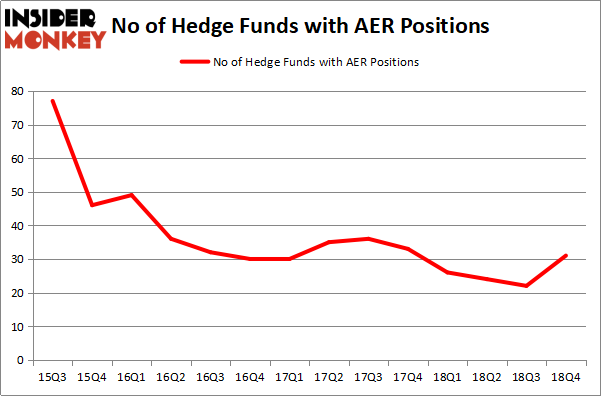 Among these funds, Eagle Capital Management held the most valuable stake in AerCap Holdings N.V. (NYSE:AER), which was worth $310.4 million at the end of the third quarter. On the second spot was Greenlight Capital which amassed $152.3 million worth of shares. Moreover, Arrowstreet Capital, Basswood Capital, and Cobalt Capital Management were also bullish on AerCap Holdings N.V. (NYSE:AER), allocating a large percentage of their portfolios to this stock.

As you can see these stocks had an average of 20 hedge funds with bullish positions and the average amount invested in these stocks was $544 million. That figure was $703 million in AER’s case. Aspen Technology, Inc. (NASDAQ:AZPN) is the most popular stock in this table. On the other hand Douglas Emmett, Inc. (NYSE:DEI) is the least popular one with only 12 bullish hedge fund positions. Compared to these stocks AerCap Holdings N.V. (NYSE:AER) is more popular among hedge funds. Considering that hedge funds are fond of this stock in relation to its market cap peers, it may be a good idea to analyze it in detail and potentially include it in your portfolio. Our calculations showed that top 15 most popular stocks among hedge funds returned 21.3% through April 8th and outperformed the S&P 500 ETF (SPY) by more than 5 percentage points. Hedge funds were also right about betting on AER as the stock returned 22.2% and outperformed the market as well.