In these volatile markets we scrutinize hedge fund filings to get a reading on which direction each stock might be going. We know that hedge funds generate strong, risk-adjusted returns over the long run, therefore imitating the picks that they are collectively bullish on can be a profitable strategy for retail investors. With billions of dollars in assets, smart money investors have to conduct complex analyses, spend many resources and use tools that are not always available for the general crowd. This doesn’t mean that they don’t have occasional colossal losses; they do (like Peltz’s recent General Electric losses). However, it is still a good idea to keep an eye on hedge fund activity. With this in mind, as the current round of 13F filings has just ended, let’s examine the smart money sentiment towards Exxon Mobil Corporation (NYSE:XOM).

Is Exxon Mobil Corporation (NYSE:XOM) a bargain? The best stock pickers are buying. The number of long hedge fund bets went up by 8 lately. Our calculations also showed that XOM isn’t among the 30 most popular stocks among hedge funds (click for Q4 rankings and see the video at the end of this article for Q3 rankings). XOM was in 63 hedge funds’ portfolios at the end of December. There were 55 hedge funds in our database with XOM positions at the end of the previous quarter.

We leave no stone unturned when looking for the next great investment idea. For example, this trader is claiming triple digit returns, so we check out his latest trade recommendations. Blockchain technology is about to go mainstream and reach heavy adoption, so we check out this tech investor’s blockchain stock pick. We read hedge fund investor letters and listen to stock pitches at hedge fund conferences (by the way watch this video if you want to hear one of the best healthcare hedge fund manager’s coronavirus analysis). Our best call in 2020 was shorting the market when S&P 500 was trading at 3150 after realizing the coronavirus pandemic’s significance before most investors. Keeping this in mind let’s take a glance at the recent hedge fund action surrounding Exxon Mobil Corporation (NYSE:XOM).

What have hedge funds been doing with Exxon Mobil Corporation (NYSE:XOM)?

Heading into the first quarter of 2020, a total of 63 of the hedge funds tracked by Insider Monkey held long positions in this stock, a change of 15% from the previous quarter. Below, you can check out the change in hedge fund sentiment towards XOM over the last 18 quarters. So, let’s see which hedge funds were among the top holders of the stock and which hedge funds were making big moves. 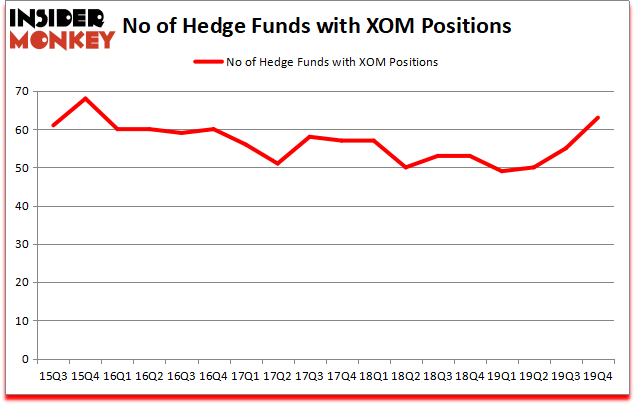 Among these funds, Fisher Asset Management held the most valuable stake in Exxon Mobil Corporation (NYSE:XOM), which was worth $455.1 million at the end of the third quarter. On the second spot was Two Sigma Advisors which amassed $216.7 million worth of shares. Adage Capital Management, Renaissance Technologies, and Citadel Investment Group were also very fond of the stock, becoming one of the largest hedge fund holders of the company. In terms of the portfolio weights assigned to each position Kamunting Street Capital allocated the biggest weight to Exxon Mobil Corporation (NYSE:XOM), around 8.53% of its 13F portfolio. Lucas Capital Management is also relatively very bullish on the stock, designating 2.28 percent of its 13F equity portfolio to XOM.

As aggregate interest increased, key hedge funds were breaking ground themselves. Renaissance Technologies, founded by Jim Simons, assembled the most valuable position in Exxon Mobil Corporation (NYSE:XOM). Renaissance Technologies had $190.4 million invested in the company at the end of the quarter. Dmitry Balyasny’s Balyasny Asset Management also initiated a $156.6 million position during the quarter. The other funds with new positions in the stock are Michael Kharitonov and Jon David McAuliffe’s Voleon Capital, Donald Sussman’s Paloma Partners, and Matthew Tewksbury’s Stevens Capital Management.

As you can see these stocks had an average of 79.25 hedge funds with bullish positions and the average amount invested in these stocks was $5105 million. That figure was $2028 million in XOM’s case. The Walt Disney Company (NYSE:DIS) is the most popular stock in this table. On the other hand AT&T Inc. (NYSE:T) is the least popular one with only 50 bullish hedge fund positions. Exxon Mobil Corporation (NYSE:XOM) is not the least popular stock in this group but hedge fund interest is still below average. This is a slightly negative signal and we’d rather spend our time researching stocks that hedge funds are piling on. Our calculations showed that top 10 most popular stocks among hedge funds returned 41.4% in 2019 and outperformed the S&P 500 ETF (SPY) by 10.1 percentage points. These stocks lost 1.0% in 2020 through April 20th but beat the market by 11 percentage points. Unfortunately XOM wasn’t nearly as popular as these 10 stocks (hedge fund sentiment was quite bearish); XOM investors were disappointed as the stock returned -40.1% during the same time period and underperformed the market. If you are interested in investing in large cap stocks with huge upside potential, you should check out the top 10 most popular stocks among hedge funds as most of these stocks already outperformed the market in 2020.