There are several ways to beat the market, and investing in small cap stocks has historically been one of them. We like to improve the odds of beating the market further by examining what famous hedge fund operators such as Jeff Ubben, George Soros and Carl Icahn think. Those hedge fund operators make billions of dollars each year by hiring the best and the brightest to do research on stocks, including small cap stocks that big brokerage houses simply don’t cover. Because of Carl Icahn and other elite funds’ exemplary historical records, we pay attention to their small cap picks. In this article, we use hedge fund filing data to analyze Western Gas Partners, LP (NYSE:WES).

Is Western Gas Partners, LP (NYSE:WES) a buy right now? Investors who are in the know are in a pessimistic mood. The number of long hedge fund positions decreased by 2 recently. Our calculations also showed that WES isn’t among the 30 most popular stocks among hedge funds. WES was in 6 hedge funds’ portfolios at the end of the fourth quarter of 2018. There were 8 hedge funds in our database with WES positions at the end of the previous quarter.

At Q4’s end, a total of 6 of the hedge funds tracked by Insider Monkey were bullish on this stock, a change of -25% from the previous quarter. On the other hand, there were a total of 10 hedge funds with a bullish position in WES a year ago. With hedgies’ positions undergoing their usual ebb and flow, there exists a few notable hedge fund managers who were upping their holdings considerably (or already accumulated large positions). 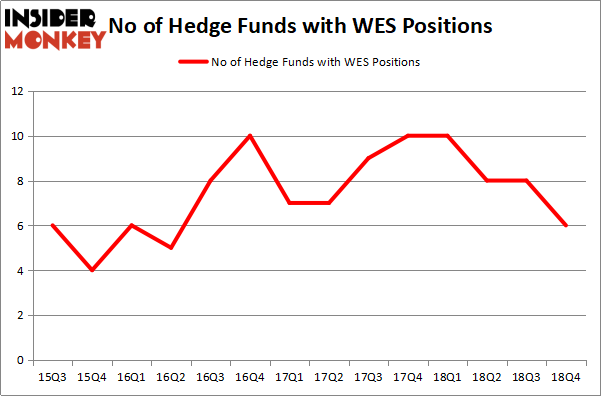 More specifically, Zimmer Partners was the largest shareholder of Western Gas Partners, LP (NYSE:WES), with a stake worth $31.9 million reported as of the end of September. Trailing Zimmer Partners was Perella Weinberg Partners, which amassed a stake valued at $14.2 million. Soros Fund Management, BP Capital, and PEAK6 Capital Management were also very fond of the stock, giving the stock large weights in their portfolios.

Judging by the fact that Western Gas Partners, LP (NYSE:WES) has witnessed declining sentiment from the entirety of the hedge funds we track, it’s safe to say that there lies a certain “tier” of money managers that decided to sell off their positions entirely in the third quarter. It’s worth mentioning that Alec Litowitz and Ross Laser’s Magnetar Capital dumped the largest position of all the hedgies followed by Insider Monkey, totaling about $41.4 million in stock, and Ken Griffin’s Citadel Investment Group was right behind this move, as the fund dropped about $4.2 million worth. These bearish behaviors are interesting, as total hedge fund interest was cut by 2 funds in the third quarter.

As you can see these stocks had an average of 17.5 hedge funds with bullish positions and the average amount invested in these stocks was $289 million. That figure was $53 million in WES’s case. ICON Public Limited Company (NASDAQ:ICLR) is the most popular stock in this table. On the other hand MGM Growth Properties LLC (NYSE:MGP) is the least popular one with only 12 bullish hedge fund positions. Compared to these stocks Western Gas Partners, LP (NYSE:WES) is even less popular than MGP. Hedge funds clearly did the right thing by dumping WES right before the stock experienced large losses. Our calculations showed that top 15 most popular stocks among hedge funds returned 21.3% through April 8th and outperformed the S&P 500 ETF (SPY) by more than 5 percentage points. Unfortunately WES wasn’t in this group. Hedge funds that bet on WES were disappointed as the stock lost 21.5% and underperformed the market. If you are interested in investing in large cap stocks, you should check out the top 15 hedge fund stocks as 12 of these outperformed the market.