How do we determine whether SunCoke Energy, Inc (NYSE:SXC) makes for a good investment at the moment? We analyze the sentiment of a select group of the very best investors in the world, who spend immense amounts of time and resources studying companies. They may not always be right (no one is), but data shows that their consensus long positions have historically outperformed the market when we adjust for known risk factors.

Is SunCoke Energy, Inc (NYSE:SXC) the right pick for your portfolio? The best stock pickers are taking a pessimistic view. The number of bullish hedge fund positions were trimmed by 4 lately. Our calculations also showed that sxc isn’t among the 30 most popular stocks among hedge funds. SXC was in 17 hedge funds’ portfolios at the end of December. There were 21 hedge funds in our database with SXC positions at the end of the previous quarter.

At the end of the fourth quarter, a total of 17 of the hedge funds tracked by Insider Monkey were bullish on this stock, a change of -19% from the second quarter of 2018. The graph below displays the number of hedge funds with bullish position in SXC over the last 14 quarters. With hedge funds’ sentiment swirling, there exists an “upper tier” of notable hedge fund managers who were boosting their stakes significantly (or already accumulated large positions). 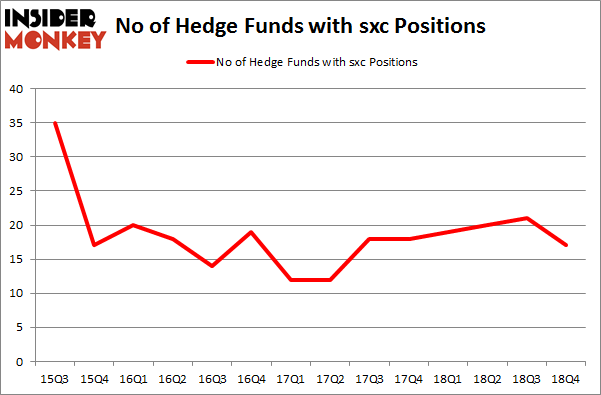 More specifically, Renaissance Technologies was the largest shareholder of SunCoke Energy, Inc (NYSE:SXC), with a stake worth $42.9 million reported as of the end of December. Trailing Renaissance Technologies was D E Shaw, which amassed a stake valued at $13 million. Tontine Asset Management, Nokomis Capital, and Ancora Advisors were also very fond of the stock, giving the stock large weights in their portfolios.

Since SunCoke Energy, Inc (NYSE:SXC) has faced falling interest from hedge fund managers, it’s safe to say that there exists a select few hedge funds who sold off their full holdings heading into Q3. It’s worth mentioning that Paul Marshall and Ian Wace’s Marshall Wace LLP dropped the biggest stake of the 700 funds monitored by Insider Monkey, comprising close to $1.7 million in stock. Matthew Hulsizer’s fund, PEAK6 Capital Management, also said goodbye to its stock, about $0.4 million worth. These bearish behaviors are important to note, as aggregate hedge fund interest dropped by 4 funds heading into Q3.