State Street Corporation (NYSE:STT) has experienced a decrease in enthusiasm from smart money in recent months. STT was in 32 hedge funds’ portfolios at the end of the fourth quarter of 2018. There were 35 hedge funds in our database with STT holdings at the end of the previous quarter. Our calculations also showed that STT isn’t among the 30 most popular stocks among hedge funds. 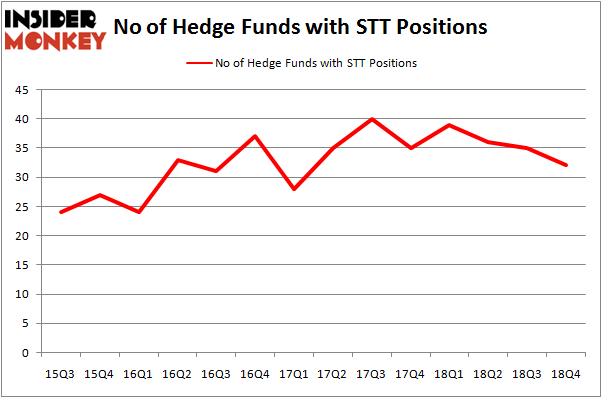 More specifically, Citadel Investment Group was the largest shareholder of State Street Corporation (NYSE:STT), with a stake worth $177.9 million reported as of the end of September. Trailing Citadel Investment Group was Yacktman Asset Management, which amassed a stake valued at $153.6 million. Millennium Management, GAMCO Investors, and Lakewood Capital Management were also very fond of the stock, giving the stock large weights in their portfolios.

Seeing as State Street Corporation (NYSE:STT) has experienced declining sentiment from the entirety of the hedge funds we track, we can see that there was a specific group of money managers who sold off their positions entirely last quarter. Interestingly, David Tepper’s Appaloosa Management LP dropped the largest investment of all the hedgies watched by Insider Monkey, totaling an estimated $99.3 million in stock. Doug Silverman and Alexander Klabin’s fund, Senator Investment Group, also said goodbye to its stock, about $41.9 million worth. These bearish behaviors are important to note, as aggregate hedge fund interest was cut by 3 funds last quarter.

As you can see these stocks had an average of 35.75 hedge funds with bullish positions and the average amount invested in these stocks was $1532 million. That figure was $911 million in STT’s case. Electronic Arts Inc. (NASDAQ:EA) is the most popular stock in this table. On the other hand Southern Copper Corporation (NYSE:SCCO) is the least popular one with only 15 bullish hedge fund positions. State Street Corporation (NYSE:STT) is not the least popular stock in this group but hedge fund interest is still below average. This is a slightly negative signal and we’d rather spend our time researching stocks that hedge funds are piling on. Our calculations showed that top 15 most popular stocks among hedge funds returned 19.7% through March 15th and outperformed the S&P 500 ETF (SPY) by 6.6 percentage points. Unfortunately STT wasn’t in this group. Hedge funds that bet on STT were disappointed as the stock returned 11.1% and underperformed the market. If you are interested in investing in large cap stocks, you should check out the top 15 hedge fund stocks as 13 of these outperformed the market.

Were Hedge Funds Right About Flocking Into Sempra Energy (SRE)?
Monthly Newsletter Strategy
Download a free copy of our newsletter and see the details inside!
Hedge Fund Resource Center
Related News
Do Hedge Funds Love State Street Corporation (STT)? 20 Dividend Stocks That Billionaires Are Piling On 4 Stocks Billionaire David Tepper Bought in Q3 (and 1 He Dumped) 16 Biggest Commercial Banks In New York City Is State Street Corp (STT) Going to Burn These Hedge Funds? Billionaire Mario Gabelli Lays Out 5 Finance Stocks That Should Get a Trump Boost Why Akamai, Molson Coors, State Street, and 2 Others Are Heading in Opposite Directions Today Ten of the Most Common Addictions 13 African Countries with the Largest White Population in 2018 6 Causes of Human Trafficking in Africa, India, and US
Billionaire Hedge Funds